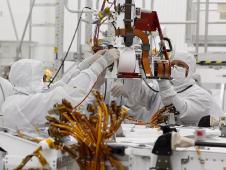 In the clean room at JPL, engineers gather around the base of Curiosity's "neck" (the Mast) as they slowly lower it into place for attachment to the rover's "body" (the Wet Electronics Box, or "WEB"). Image credit: NASA/JPL-Caltech
› Full image and caption 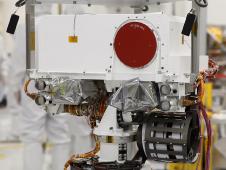 Curiosity's "eyes" (the Mastcam) are shrouded in a silvery material, awaiting their first look around the clean room at NASA's Jet Propulsion Laboratory, where the rover is being built. Image credit: NASA/JPL-Caltech
› Full image and caption 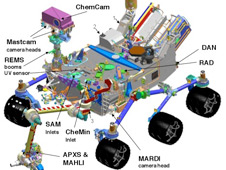 This figure shows the location of the ten science instruments on the Curiosity rover. Image credit: NASA/JPL-Caltech
› Larger image

Talk about a growth-spurt. In one week, Curiosity grew by approximately 1 meter (3.5 feet) when spacecraft technicians and engineers attached the rover's neck and head (called the Remote Sensing Mast) to its body. At around 2 meters (about 7 feet) tall, the next rover to Mars now stands head and shoulders above the rest.

This video shows engineers and technicians carefully attaching the "head" of the Mars Curiosity rover to its "body" in a clean room at NASA's Jet Propulsion Laboratory, Pasadena, Calif.

While it now has a good head on its shoulders, Curiosity's "eyes" (the Mastcam), have been blindfolded in a protective silvery material. The Mastcam, containing two digital cameras, will soon be unveiled, so engineers can test its picture-taking abilities.

Up next today (July 23), the towering rover will take its first baby steps: a slow roll on the floor of the clean room where it's being built at NASA's Jet Propulsion Laboratory, Pasadena, Calif. Watch Curiosity's progress live from the clean room on Ustream until 3:30 p.m. PDT today: http://www.ustream.tv/nasajpl .

Learn more about Curiosity at: http://mars.jpl.nasa.gov/msl/ .