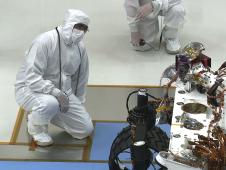 Mars Curiosity team members gather in the gallery above the clean room at NASA's Jet Propulsion Laboratory to watch the rover roll for the first time. Image credit: NASA/JPL-Caltech

Like proud parents savoring their baby's very first steps, mission team members gathered in a gallery above a clean room at NASA's Jet Propulsion Laboratory to watch the Mars Curiosity rover roll for the first time.

Engineers and technicians wore "bunny suits" while guiding Curiosity through its first steps, or more precisely, its first roll on the clean room floor. The rover moved forward and backward about 1 meter (3.3 feet).

Mars Science Laboratory (aka Curiosity) is scheduled to launch in fall 2011 and land on the Red Planet in August 2012. Curiosity is the largest rover ever sent to Mars. It will carry 10 instruments that will help search an intriguing region of the Red Planet for two things:
1. Environments where life might have existed
2. The capacity of those environments to preserve evidence of past life

Learn more about Curiosity at http://mars.jpl.nasa.gov/msl/.