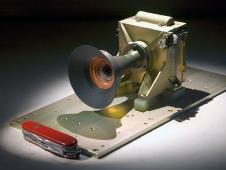 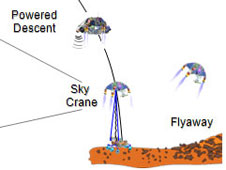 This graphic portrays the sequence of key events in August 2012 from the time the NASA's Mars Science Laboratory spacecraft, with its rover Curiosity, enters the Martian atmosphere to a moment after it touches down on the surface. Image Credit: NASA/JPL-Caltech
› Full image and caption 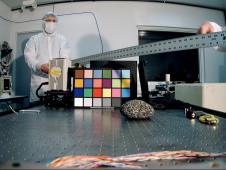 A downward-pointing camera on the front-left side of NASA's Curiosity rover will give adventure fans worldwide an unprecedented sense of riding a spacecraft to a landing on Mars.

The Mars Descent Imager, or MARDI, will start recording high-resolution video about two minutes before landing in August 2012. Initial frames will glimpse the heat shield falling away from beneath the rover, revealing a swath of Martian terrain below illuminated in afternoon sunlight. The first scenes will cover ground several kilometers (a few miles) across. Successive images will close in and cover a smaller area each second.

The full-color video will likely spin, then shake, as the Mars Science Laboratory mission's parachute, then its rocket-powered backpack, slow the rover's descent. The left-front wheel will pop into view when Curiosity extends its mobility and landing gear.

The spacecraft's own shadow, unnoticeable at first, will grow in size and slide westward across the ground. The shadow and rover will meet at a place that, in the final moments, becomes the only patch of ground visible, about the size of a bath towel and underneath the rover.

Dust kicked up by the rocket engines during landing may swirl as the video ends and Curiosity's surface mission can begin.

All of this, recorded at about four frames per second and close to 1,600 by 1,200 pixels per frame, will be stored safely into the Mars Descent Imager's own flash memory during the landing. But the camera's principal investigator, Michael Malin of Malin Space Science Systems, San Diego, and everyone else will need to be patient. Curiosity will be about 250 million kilometers (about 150 million miles) from Earth at that point. It will send images and other data to Earth via relay by one or two Mars orbiters, so the daily data volume will be limited by the amount of time the orbiters are overhead each day.

"We will get it down in stages," said Malin. "First we'll have thumbnails of the descent images, with only a few frames at full scale."

Subsequent downlinks will deliver additional frames, selected based on what the thumbnail versions show. The early images will begin to fulfill this instrument's scientific functions. "I am really looking forward to seeing this movie. We have been preparing for it a long time," Malin said. The lower-resolution version from thumbnail images will be comparable to a YouTube video in image quality. The high-definition version will not be available until the full set of images can be transmitted to Earth, which could take weeks, or even months, sharing priority with data from other instruments."

The Mars Descent Imager will provide the Mars Science Laboratory team with information about the landing site and its surroundings. This will aid interpretation of the rover's ground-level views and planning of initial drives. Hundreds of the images taken by the camera will show features smaller than what can be discerned in images taken from orbit.

"Each of the 10 science instruments on the rover has a role in making the mission successful," said John Grotzinger of the California Institute of Technology in Pasadena, chief scientist for the Mars Science Laboratory. "This one will give us a sense of the terrain around the landing site and may show us things we want to study. Information from these images will go into our initial decisions about where the rover will go."

The nested set of images from higher altitude to ground level will enable pinpointing Curiosity's location even before an orbiter can photograph the rover on the surface.

Malin said, "Within the first day or so, we'll know where we are and what's near us. MARDI doesn't do much for six-month planning -- we'll use orbital data for that -- but it will be important for six-day and 16-day planning."

In addition, combining information from the descent images with information from the spacecraft's motion sensors will enable calculating wind speeds affecting the spacecraft on its way down, an important atmospheric science measurement. The descent data will later serve in designing and testing future landing systems for Mars that could add more control for hazard avoidance.

After landing, the Mars Descent Imager will offer the capability to obtain detailed images of ground beneath the rover, for precise tracking of its movements or for geologic mapping. The science team will decide whether or not to use that capability. Each day of operations on Mars will require choices about how to budget power, data and time.

Last month, spacecraft engineers and technicians re-installed the Mars Descent Imager onto Curiosity for what is expected to be the final time, as part of assembly and testing of the rover and other parts of the Mars Science Laboratory flight system at NASA's Jet Propulsion Laboratory, Pasadena, Calif. Besides the rover itself, the flight system includes the cruise stage for operations between Earth and Mars, and the descent stage for getting the rover from the top of the Martian atmosphere safely to the ground.

Malin Space Science Systems delivered the Mars Descent Imager in 2008, when NASA was planning a 2009 launch for the mission. This camera shares many design features, including identical electronic detectors, with two other science instruments the same company is providing for Curiosity: the Mast Camera and the Mars Hand Lens Imager. The company also provided descent imagers for NASA's Mars Polar Lander, launched in 1999, and Phoenix Mars Lander, launched in 2007. However, the former craft was lost just before landing and the latter did not use its descent imager due to concern about the spacecraft's data-handling capabilities during crucial moments just before landing.