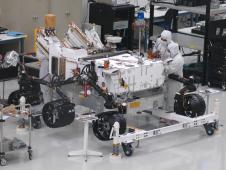 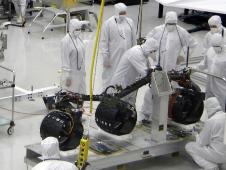 With the wheels and suspension system already installed onto one side of NASA's Mars rover Curiosity the previous day, spacecraft engineers and technicians prepare the other side's mobility subsystem for installation on June 29, 2010. Image Credit: NASA/JPL-Caltech › Full image and caption


PASADENA, Calif. – NASA's next Mars rover, Curiosity, is sitting pretty on a set of spiffy new wheels that would be the envy of any car show on Earth.

The wheels and a suspension system were added this week by spacecraft technicians and engineers. These new and important touches are a key step in assembling and testing the flight system in advance of a planned 2011 launch.

Curiosity, centerpiece of NASA's Mars Science Laboratory mission, is a six-wheeler and uses a rocker-bogie suspension system like its smaller predecessors: Spirit, Opportunity and Sojourner. Each wheel has its own drive motor, and the corner wheels also have independent steering motors. Unlike earlier Mars rovers, Curiosity will also use its mobility system as a landing gear when the mission's rocket-powered descent stage lowers the rover directly onto the Martian surface on a tether in August 2012.

The mission will launch from Florida during the period Nov. 25 to Dec. 18, 2011. Curiosity will examine an area of Mars for modern or ancient habitable environments, including any that may have also been favorable for preserving clues about life and environment, though this mission will not seek evidence of life. It will examine rocks, soil and atmosphere with a diverse payload of tools, including a laser to vaporize patches of rock from a distance and an instrument designed to test for organic compounds.