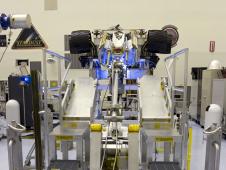 Image above: The MMRTG is detached from its integration cart and installed onto the aft of the Curiosity rover for a fit check. Photo credit: NASA
› Larger image 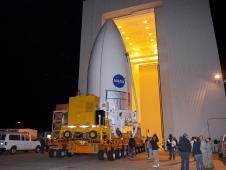 About the size of a small SUV and weighing as much as some cars, the Mars Science Laboratory "Curiosity" is being asked to conduct the most intensive examination of the surface of the red planet ever attempted. It carries cameras, a robotic arm, drill and even a laser to vaporize bits of rock at a distance.

That's too much work for solar panels to power, so NASA is fueling the rover with a plutonium-powered battery of sorts called a multi-mission radioisotope thermoelectric generator, or MMRTG. Loaded with 10 pounds of the material, the power source is expected to generate electricity for a mission lasting at least two Earth years.

"It requires a fancy power supply in order to do the job," said Dr. Pam Conrad, deputy principal investigator for MSL. "This enables us to make measurements all day, every day, at night, in the winter."

Before researchers get a taste of groundbreaking research about Mars, the launch team at NASA's Kennedy Space Center in Florida is focusing on its responsibility to safely launch the spacecraft and its power source.

Even if there were an accident and a release of plutonium, something officials put at a 3-tenths of one percent chance of happening, the material would most likely remain on federal property either at Kennedy or Cape Canaveral Air Force Station, the mission's launch site.

However, preparation has been the foremost thought for NASA officials and the launch team will be beefed up with officials from the Lawrence Livermore National Laboratory in Calif., specifically the National Atmospheric Release Advisory Center, or NARAC, a team that models plumes to predict radiation hazards.

Ron Baskett, an atmospheric scientist for NARAC, said a network will be in place on launch day to feed critical information to the Livermore lab to generate the models if there is a release of radioactive material.

Even the network to collect that data will be strengthened a bit over the usual launch day measures. The National Weather Service's Melbourne office will focus some of its instruments on Cape Canaveral Air Force Station on the day of launch, now targeted for Nov. 25.

For its part, NASA and the Air Force's 45th Space Wing have 46 towers to collect wind data and two more detailed instruments that collect information about conditions more than 20 miles above Earth.

"We believe we have the right team put together, with the right people and all the control and functions that you might expect for this type of launch," Brisbin said.

Officials expect a normal launch day, culminating in an Atlas V lifting Curiosity off the Earth and on a path to Mars.

"If you see a plume, it does not mean there's been an accident," said Dr. Frank Merceret, director of research for Kennedy's weather office. Most launches produce a plume of some sort, he said, and even accident would not necessarily indicate any radiation has leaked from the spacecraft.

NASA has used the power units 26 times in the past, including the Apollo moon landings and the Viking landers on Mars. Also, they've been used to power the Pioneer and Voyager spacecraft, along with the Galileo mission to Jupiter. More recently, the Cassini mission to Saturn and New Horizons mission to Pluto both run on RTGs. All were launched safely.