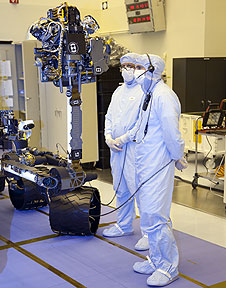 Image above: Technicians examine the turret of scientific instruments at the end of the MSL's arm. The turret weighs 73 pounds and holds the machines that will touch the rocks and soil on Mars to gather information. Photo credit: NASA/Frankie Martin
› Larger image 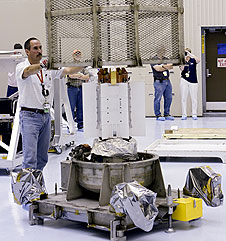 Image above: A technician oversees the removal of a ventilated cage over the MMRTG that will be used to generate electricity for the MSL on Mars. Photo credit: NASA/Troy Cryder
› Larger image 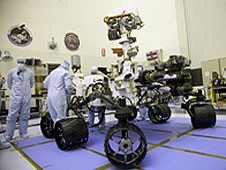 Image above: Technicians look over the MSL Curiosity during inspections at the Jet Propulsion Laboratory in Pasadena, Calif. Phot credit: NASA
› Larger image 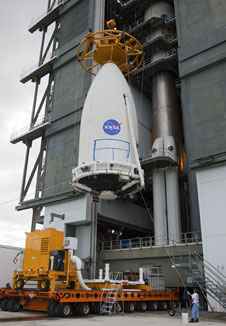 The spacecraft is to launch Nov. 26 atop a United Launch Alliance Atlas V rocket. Liftoff is slated for 10:02 a.m. It will take more than eight months for Curiosity to fly the 354 million miles on its path to Mars. Landing is expected in early August 2012.

Although calling the spacecraft a laboratory might suggest it will stay in one place, Curiosity actually is a rover that will travel some 12 miles inside Gale Crater during its 23-month mission. The size of a car or small SUV, the rover weighs nearly a ton and its scientific payload is 10 times more massive than the instrument sets taken to Mars by previous rovers.

"This is a vehicle on Mars, cruising around, drilling into rocks, chipping away at stuff to see what that planet's made out of," said Omar Baez, the launch director of the MSL mission. "And even if it didn't do that, if it just cruised around Mars and took pictures, the value in that is tremendous."

Curiosity will be the fourth NASA rover to touch down on Mars since July 1997, when the Pathfinder probe and its skateboard-sized Sojourner rover bounced onto the surface and began several months of analysis that suggested early Mars was a lot like Earth, with water at the surface and a thicker atmosphere.

Twin rovers Spirit and Opportunity picked up the studies when they landed at two different places on Mars and began independent surveys. Both rovers were quite a bit larger than Sojourner and carried 11 pounds of scientific equipment. Spirit operated until the spring of 2010 but Opportunity remains active on Mars and has racked up 21 miles of driving.

"They take on a personality of their own," Baez said. "I mean, we name them and folks are able to follow them and what they're doing in this day and age of technology you can jump on the web and figure out what they're doing right now. It's awesome, the next best thing is really having humans on Mars."

Curiosity takes that a step farther with a mobile suite of instruments that will survey the Martian Gale Crater in search of the answers to one of the most intriguing questions of modern science.

"The hope is that we can land there and basically unlock the secrets of an environment that existed there a few billion years ago on Mars that was potentially a place that life could have survived," said Ashwin Vasavada, MSL deputy project scientist.

Gale Crater is a 96-mile-diameter crater with a 3-mile-high sediment mountain in the middle of it. Pictures taken from Mars orbit shows layers of minerals and soils in the crater that make up a picture like the colored bands on the walls of the Grand Canyon on Earth.

"What's special about Gale is it has the thickest package of sediment that we've been able to identify on Mars, so it represents a lot of time and hopefully we'll get some idea about what has happened over time," said Pamela Conrad, MSL deputy principal investigator.

Researchers may be able to look at images from inside the crater and see a history book of Martian geology.

But there's more to Curiosity than pictures. A laser on the rover will vaporize tiny segments of rocks so an instrument on board can find out what they are made of. A drill at the end of the rover's 7-foot-long arm will pull samples that can be tested in one of the rover's analytical tools.

"The MSL rover is essentially like a geologist in a self-contained laboratory and the capabilities that exist are probably the next best thing to sending a human to do the same job," said Wanda Harding, the MSL's mission manager for the Launch Services Program.

Because of its ambitious mission, the Curiosity rover was designed for a more powerful energy source than solar arrays, the technology used on the previous rovers. The Department of Energy built for NASA a nuclear-powered electrical system instead, called a multi-mission radioisotope thermoelectric generator, or MMRTG. It has no moving parts, but converts heat from a small core of plutonium into about 110 watts of electricity around-the-clock and all year.

It's the same power source that enables probes to work in deep space on missions such as Galileo's examination of Jupiter, Cassini's unprecedented look Saturn and the New Horizons mission to Pluto and the farthest boundary of the solar system. It was also used on the surface of Mars by the Viking landers in 1976.

"Having this important change and novel power supply will enable us to make important measurements every day, all year," Conrad said.

NASA also takes extra precautions because of the power supply, including working with other federal agencies to ensure its safety on Earth and during launch.

"The way the RTG is encased, this thing's in a safe, for all intents and purposes," Baez said. "We really do take that extra step in making sure that this material is safeguarded and won't harm the planet."

Mars has been a focus of Earth's attention since its red shape was first seen in the night sky by the ancients. Every astronomical invention from the telescopes to early space probes were used to find out more and more about the planet.

Curiosity and its builders and research team expect to add their own wealth of information to what is known about the red planet.

"Twenty years from now I think they'll look back on this and consider this a true landmark mission, a great stepping stone for human exploration beyond Earth orbit," Harding said. "It will certainly be one for the history books."