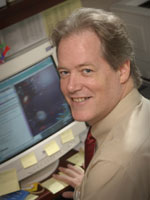 Dr. Michael A. Meyer has been the lead scientist for NASA's Mars Exploration Program, at NASA Headquarters in Washington. He oversees the program's science operations and planning. Previously, he was NASA's senior scientist for astrobiology and program scientist for the 2001 Mars Odyssey mission. Meyer earned his master's and doctorate degrees in oceanography from Texas A&M University, College Station, and a bachelor's degree from Rensselaer Polytechnic Institute, Troy, N.Y. His research emphasis has been in microorganisms living in extreme environments.
+ Larger image
› Back To Top