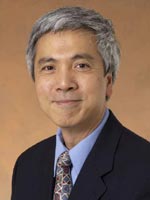 Dr. Fuk K. Li has been Mars Exploration Program manager at NASA's Jet Propulsion Laboratory, Pasadena, since March 2005. The program includes NASA missions active at Mars and in development. Previously, Li was deputy manager of Mars exploration. From 2001 to 2004, Li was the Deputy Director of the Solar System Exploration Directorate, and from 1997 to 2001, he managed NASA's New Millennium Program, which develops and tests new technologies in space flight for use in later science missions. Previously, he managed the Earth Science Program, was project engineer for the NASA Scatterometer and was involved in various radar remote-sensing activities. He earned his bachelor's and doctorate degrees in physics from the Massachusetts Institute of Technology, Cambridge, before joining JPL in 1979. He lives in Arcadia, Calif.
+ Larger image
› Back To Top