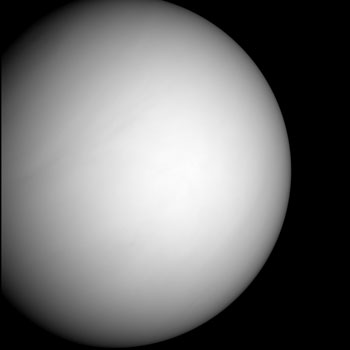 The MESSENGER spacecraft snapped a series of images as it approached Venus on June 5. The planet is enshrouded by a global layer of clouds that obscures its surface to the MESSENGER Dual Imaging System (MDIS) cameras.

This single frame is part of a color sequence taken to help the MESSENGER team calibrate the camera in preparation for the spacecraft’s first flyby of Mercury on January 14, 2008. Over the next several months the camera team will pore over the 614 images taken during this Venus encounter to ascertain color sensitivity and other optical properties of the instrument. These tasks address two key goals for the camera at Mercury: understanding surface color variations and their relation to compositional variations in the crust, and ensuring accurate cartographic placement of features on Mercury’s surface.

Preliminary analysis of the Venus flyby images indicates that the cameras are healthy and will be ready for next January’s close encounter with Mercury. 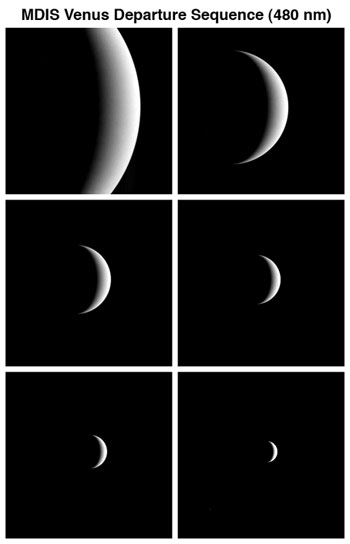 After acquiring hundreds of high-resolution images during close approach to Venus, MESSENGER turned its wide-angle camera back to the planet and acquired a departure sequence. These images provide a spectacular good-bye to the cloud-shrouded planet while also providing valuable data to the camera calibration team.