Ridges and Cliffs on Mercury's Surface 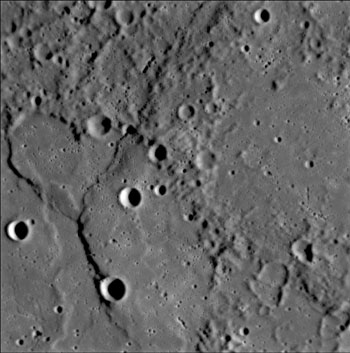 Click image to enlarge
A complex history of geological evolution is recorded in this frame from the Narrow Angle Camera (NAC), part of the Mercury Dual Imaging System (MDIS) instrument, taken during MESSENGER’s close flyby of Mercury on January 14, 2008. Part of an old, large crater occupies most of the lower left portion of the frame. An arrangement of ridges and cliffs in the shape of a "Y" crosses the crater’s floor. The shadows defining the ridges are cast on the floor of the crater by the Sun shining from the right, indicating a descending stair-step of plains. The main, right-hand branch of the "Y" crosses the crater floor, the crater rim, and continues off the top edge of the picture; it appears to be a classic “lobate scarp” (irregularly shaped cliff) common in all areas of Mercury imaged so far. These lobate scarps were formed during a period when Mercury’s crust was contracting as the planet cooled. In contrast, the branch of the Y to the left ends at the crater rim and is restricted to the floor of the crater. Both it and the lighter-colored ridge that extends downward from it resemble “wrinkle ridges” that are common on the large volcanic plains, or "maria," on the Moon. The MESSENGER science team is studying what features like these reveal about the interior cooling history of Mercury.

Ghostly remnants of a few craters are seen on the right side of this image, possibly indicating that once-pristine, bowl-shaped craters (like those on the large crater’s floor) have been subsequently flooded by volcanism or some other plains-forming process.

This image was taken 18 minutes after close approach, when MESSENGER was about 5,000 kilometers (about 3,000 miles) away from Mercury. The image is about 200 kilometers (about 125 miles) across, and features as small as about 400 meters (about 400 yards) can be resolved. Mission Elapsed Time (MET) of image: 108825904 Credit: Credit: NASA/Johns Hopkins University Applied Physics Laboratory/Carnegie Institution of Washington