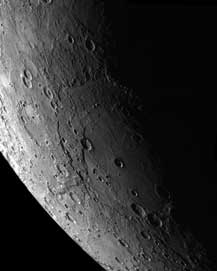 A mosaic of images collected by MESSENGER's Narrow Angle Camera as the spacecraft approached Mercury on October 6, 2008. Credit: NASA/Johns Hopkins University Applied Physics Laboratory/Arizona State University/Carnegie Institution of Washington. Image reproduced courtesy of Science/AAAS. Analyses of data from the MErcury Surface, Space ENvironment, GEochemistry, and Ranging (MESSENGER) spacecraft’s second flyby of Mercury in October 2008 show that the planet’s atmosphere, magnetosphere, and geological past are all characterized by much greater levels of activity than scientists first suspected.

On October 6, 2008, the probe flew by Mercury for the second time, capturing more than 1,200 high-resolution and color images of the planet unveiling another 30 percent of Mercury’s surface that had never before been seen by spacecraft and gathering essential data for planning the remainder of the mission.

“MESSENGER’s second Mercury flyby provided a number of new findings,” says MESSENGER Principal Investigator Sean Solomon at the Carnegie Institution of Washington. “One of the biggest surprises was how strongly the planet’s magnetospheric dynamics changed from what we saw during the first Mercury flyby in January 2008. Another was the discovery of a large and unusually well preserved impact basin that was the focus for concentrated volcanic and deformational activity. The first detection of magnesium in Mercury’s exosphere and neutral tail provides confirmation that magnesium is an important constituent of Mercury’s surface materials. And our nearly global imaging coverage of the surface after this flyby has given us fresh insight into how the planet's crust was formed.”

These findings are reported in four papers published in the May 1 issue of Science magazine. 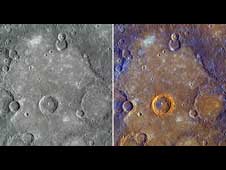 The probe’s Mercury Atmospheric and Surface Composition Spectrometer, or MASCS, detected significant amounts of magnesium in the planet’s atmosphere, reports William McClintock of the University of Colorado at Boulder’s Laboratory for Atmospheric and Space Physics. “Detecting magnesium was not too surprising, but seeing it in the amounts and distribution we recorded was unexpected,” said McClintock, a MESSENGER co-investigator and lead author of one of the four papers. “This is an example of the kind of individual discoveries that the MESSENGER team will piece together to give us a new picture of how the planet formed and evolved.”

The instrument also measured other exospheric constituents during the October 6 flyby, including calcium and sodium, and he suspects that additional metallic elements from the surface including aluminum, iron, and silicon also contribute to the exosphere.

MESSENGER observed a radically different magnetosphere at Mercury during its second flyby, compared with its earlier January 14 encounter, writes MESSENGER co-investigator James Slavin, of the NASA Goddard Space Flight Center, lead author of another paper. “During the first flyby, MESSENGER entered through the dusk side of the magnetic tail, measuring relatively calm dipole-like magnetic fields closer to the planet, and then exited the magnetosphere near dawn,” Slavin says. “Important discoveries were made, but scientists didn’t detect any dynamic features, other than some Kelvin-Helmholtz waves along its outer boundary, the magnetopause.”

But the second flyby was a totally different situation, he says. “ MESSENGER measured large magnetic flux leakage through the dayside magnetopause, about a factor of 10 greater than even what is observed at the Earth during its most active intervals. The high rate of solar wind energy input was evident in the great amplitude of the plasma waves and the large magnetic structures measured by the Magnetometer throughout the encounter.”

The magnetospheric variability observed thus far by MESSENGER supports the hypothesis that the great day-to-day changes in Mercury’s atmosphere may be due to changes in the shielding provided by the magnetosphere.

One of the most exciting results of MESSENGER’s second flyby of Mercury is the discovery of a previously unknown large impact basin. The Rembrandt basin is more than 700 kilometers (430 miles) in diameter and if formed on the east coast of the United States would span the distance between Washington, D.C., and Boston.

The Rembrandt basin formed about 3.9 billion years ago, near the end of the period of heavy bombardment of the inner Solar System, suggests MESSENGER Participating Scientist Thomas Watters, lead author of another of the papers. Although ancient, the Rembrandt basin is younger than most other known impact basins on Mercury.

“This is the first time we’ve seen terrain exposed on the floor of an impact basin on Mercury that is preserved from when it formed” says Watters. “Landforms such as those revealed on the floor of Rembrandt are usually completely buried by volcanic flows.”

Just over a year ago, half of Mercury was unknown. Globes of the planet were blank on one side. With image data from MESSENGER, scientists have now seen 90 percent of the planet’s surface at high resolution and can start to assess what this global picture is telling us about the history of the planet's crustal evolution, says Brett Denevi, a MESSENGER team member at Arizona State University and lead author of one of the papers.

“After mapping the surface, we see that approximately 40 percent is covered by smooth plains,” she says. “Many of these smooth plains are interpreted to be of volcanic origin, and they are globally distributed (in contrast with the Moon, which has a nearside/farside asymmetry in the abundance of volcanic plains). But we haven’t yet seen evidence for a feldspar-rich crust, which makes up the majority of the lunar highlands and is thought to have formed by flotation during the cooling of an early lunar magma ocean. Instead, much of Mercury's crust may have formed through repeated volcanic eruptions in a manner more similar to the crust of Mars than to that of the Moon.”

Scientists continue to examine data from the first two flybys and are preparing to gather even more information from a third flyby of the planet on September 29, 2009.

“The third Mercury flyby is our final ‘dress rehearsal’ for the main performance of our mission: insertion of our probe into orbit around Mercury in March 2011 and the continuous collection of information about the planet and its environment for one year,” adds Solomon. “The orbital phase of our mission will be like staging two flybys per day. We’ll be drinking from a fire hose of new data, but at least we’ll never be thirsty. Mercury has been coy in revealing its secrets slowly so far, but in less than two years the innermost planet will become a close friend.”

MESSENGER (MErcury Surface, Space ENvironment, GEochemistry, and Ranging) is a NASA-sponsored scientific investigation of the planet Mercury and the first space mission designed to orbit the planet closest to the Sun. The MESSENGER spacecraft launched on August 3, 2004, and after flybys of Earth, Venus, and Mercury will start a yearlong study of its target planet in March 2011. Sean C. Solomon, of the Carnegie Institution of Washington, leads the mission as principal investigator. The Johns Hopkins University Applied Physics Laboratory built and operates the MESSENGER spacecraft and manages this Discovery-class mission for NASA.

The Applied Physics Laboratory, a division of the Johns Hopkins University, meets critical national challenges through the innovative application of science and technology. For more information on APL visit: JHUAPL.