Messenger's approach to Mercury is chronicled in this image taken by the Wide Angle Camera on Messenger. Credit: NASA/JHUAPL On Monday, Jan. 14, a pioneering NASA spacecraft will be the first to visit Mercury in almost 33 years when it soars over the planet to explore and snap close-up images of never-before-seen terrain. These findings could open new theories and answer old questions in the study of the solar system.

The MErcury Surface, Space ENvironment, GEochemistry, and Ranging spacecraft, called MESSENGER, is the first mission sent to orbit the planet closest to our sun. Before that orbit begins in 2011, the probe will make three flights past the small planet, skimming as close as 124 miles above Mercury's cratered, rocky surface. MESSENGER's cameras and other sophisticated, high-technology instruments will collect more than 1,200 images and make other observations during this approach, encounter and departure. It will make the first up-close measurements since Mariner 10 spacecraft's third and final flyby on March 16, 1975. When Mariner 10 flew by Mercury in the mid-1970s, it surveyed only one hemisphere. 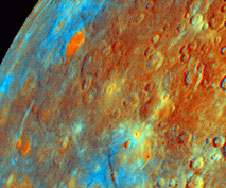 This color composite image produced from Mariner 10 data reveals evidence that different terrains on Mercury have different compositions. Image courtesy of M. S. Robinson (Robinson and Lucey, Science, 1997). "This is raw scientific exploration and the suspense is building by the day," said Alan Stern, associate administrator for NASA's Science Mission Directorate, Washington. "What will MESSENGER see? Monday will tell the tale."

This encounter will provide a critical gravity assist needed to keep the spacecraft on track for its March 2011 orbit insertion, beginning an unprecedented yearlong study of Mercury. The flyby also will gather essential data for mission planning.

"During this flyby we will begin to image the hemisphere that has never been seen by a spacecraft and Mercury at resolutions better than those acquired by Mariner 10," said Sean C. Solomon, MESSENGER principal investigator, Carnegie Institution of Washington. "Images will be in a number of different color filters so that we can start to get an idea of the composition of the surface."

One site of great interest is the Caloris basin, an impact crater about 800 miles in diameter, which is one of the largest impact basins in the solar system.
"Caloris is huge, about a quarter of the diameter of Mercury, with rings of mountains within it that are up to two miles high," said Louise Prockter, the instrument scientist for the Mercury Dual Imaging System at the Johns Hopkins University Applied Physics Laboratory in Laurel. "Mariner 10 saw a little less than half of the basin. During this first flyby, we will image the other side." 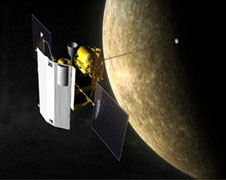 Artist's concept of the Messenger flyby of Mercury. Credit: JHUAPL MESSENGER's instruments will provide the first spacecraft measurements of the mineralogical and chemical composition of Mercury's surface. It also will study the global magnetic field and improve our knowledge of the gravity field from the Mariner 10 flyby. The long-wavelength components of the gravity field provide key information about the planet's internal structure, particularly the size of Mercury's core.

The flyby will provide an opportunity to examine Mercury's environment in unique ways, not possible once the spacecraft begins orbiting the planet. The flyby also will map Mercury's tenuous atmosphere with ultraviolet observations and document the energetic particle and plasma of Mercury's magnetosphere. In addition, the flyby trajectory will enable unique particle and plasma measurements of the magnetic tail that sweeps behind Mercury.

Launched Aug. 3, 2004, MESSENGER is slightly more than halfway through its 4.9-billion mile journey. It already has flown past Earth once and Venus twice. The spacecraft will use the pull of Mercury's gravity during this month's pass and others in October 2008 and September 2009 to guide it progressively closer to the planet's orbit. Insertion will be accomplished with a fourth Mercury encounter in 2011.

The MESSENGER project is the seventh in NASA's Discovery Program of low-cost, scientifically focused space missions. The Applied Physics Laboratory designed, built and operates the spacecraft and manages the mission for NASA.