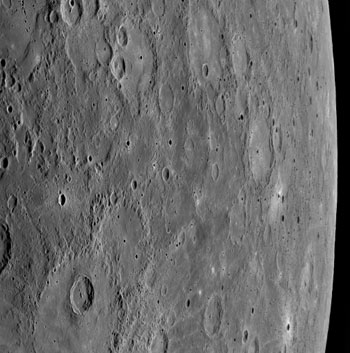 Click image to enlarge
Just nine minutes after MESSENGER passed 200 kilometers (124 miles) above the surface of Mercury – its closest distance to the planet during the January 14, 2008, flyby – the probe’s Wide Angle Camera (WAC) on the Mercury Dual Imaging System (MDIS) snapped this image. The WAC is equipped with 11 different narrow-band filters, and this image was taken in filter 7, which is sensitive to light near the red end of the visible spectrum (750 nm). This view, also imaged through the remaining 10 WAC filters, is from the first set of images taken following MESSENGER's closest approach with Mercury.

The image shows Mercury's surface as seen from a low viewing angle, looking over the surface and off the limb of the planet on the right side of the image. The cratered terrain in the image is on the side of Mercury unseen by spacecraft prior to this MESSENGER flyby. This scene was imaged at multiple viewing angles as MESSENGER sped away from Mercury, and these multiple views of the same surface features from different perspectives and in different colors will be used to help understand the properties of Mercury's surface.