Grow Text SizeShrink Text Size
Magnetic Tornadoes Could Liberate Mercury's Tenuous Atmosphere
As the closest planet to the sun, Mercury is scorching hot, with daytime temperatures of more than 800 degrees Fahrenheit (approximately 450 degrees Celsius). It is also the smallest rocky planet, so its gravity is weak, only about 38 percent of Earth's. These conditions make it hard for the planet to hold on to its atmosphere, which is extremely thin, and invisible to the human eye. However, it can be seen by special instruments attached to telescopes and spacecraft like MESSENGER (MErcury Surface, Space ENvironment, GEochemistry, and Ranging). 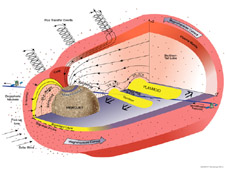 This is a diagram of the October 6, 2008, MESSENGER flyby that revealed magnetic tornadoes forming in Mercury's magnetic field. The tornadoes are corkscrew-shaped bundles of twisted magnetic fields and plasma. The pink area represents the boundary of Mercury's magnetic field, called the magnetopause. The tornadoes are technically known as "flux transfer events" (twisted lines) when they form at the magnetopause and "plasmoids" (yellow areas) when they form in the long magnetic "tail" extending from the night-side of Mercury. The large magnetic field leakage through the magnetopause and the flux transfer events acts as open channels through which the solar wind can flow down to the surface of the planet and sputter neutral atoms into Mercury’s atmosphere. Credit: Image produced by NASA/Goddard Space Flight Center/Johns Hopkins University Applied Physics Laboratory/Carnegie Institution of Washington. Image reproduced courtesy of Science/AAAS.
Print-resolution copy
"Mercury's atmosphere is so thin, it would have vanished long ago unless something was replenishing it," says Dr. James A. Slavin of NASA's Goddard Space Flight Center, Greenbelt, Md., a co-investigator on NASA's MESSENGER mission to Mercury. That something could be the solar wind, a thin gas of electrically charged particles, called a plasma, which blows constantly from the surface of the sun. The solar wind moves quickly, usually around 250 to 370 miles per second (about 400 to 600 kilometers/second); fast enough to blast atoms off the surface of Mercury. Through a process called "sputtering," solar wind particles that crash into Mercury’s surface transfer sufficient energy to launch some atoms into ballistic trajectories high above the surface and replenish Mercury's atmosphere, according to Slavin.

However, there's a problem – Mercury's magnetic field gets in the way. MESSENGER's first flyby on January 14, 2008, confirmed that the planet has a global magnetic field, as first discovered by the Mariner 10 spacecraft during its flybys of the planet in 1974 and 1975.

During its second flyby of the planet on October 6, 2008, MESSENGER discovered that Mercury’s magnetic field can be extremely leaky indeed. The spacecraft encountered magnetic "tornadoes" – twisted bundles of magnetic fields connecting the planetary magnetic field to interplanetary space – that were up to 500 miles wide or a third of the radius of the planet.

Venus, Earth, and even Mars have thick atmospheres compared to Mercury, so the solar wind never makes it to the surface of these planets, even if there is no global magnetic field in the way, as is the case for Venus and Mars. Instead, it hits the upper atmosphere of these worlds, where it has the opposite effect to that on Mercury, gradually stripping away atmospheric gas as it blows by.

Venus has a thick atmosphere that may be replenished by volcanoes, so losses to the solar wind are insignificant. Mars is a different story. Mars lost its global magnetic field billions of years ago. With little apparent volcanic activity since then, the solar wind could have eroded a significant portion of the Red Planet's atmosphere.

Features on Mars resembling dry riverbeds, and the discovery of minerals that form in the presence of water, indicate that Mars once had a thicker atmosphere that kept it warm enough for liquid water to flow on the surface. However, somehow that much thicker ancient atmosphere got lost, because it appears Mars has been cold and dry for billions of years.

In 2013, NASA plans to launch a mission to Mars called MAVEN (Mars Atmosphere and Volatile Evolution Mission). It will explore the various ways Mars loses its atmosphere to space, including how much may have been stripped away by the solar wind.

The process of linking interplanetary and planetary magnetic fields, called magnetic reconnection, is common throughout the cosmos. It occurs in Earth's magnetic field, where it generates magnetic tornadoes as well. However, the MESSENGER observations show the reconnection rate is ten times higher at Mercury.

"Mercury's proximity to the sun only accounts for about a third of the reconnection rate we see," said Slavin. "It will be exciting to see what's special about Mercury to explain the rest. We'll get more clues from MESSENGER's third flyby on September 29, 2009, and when we get into orbit in March 2011."

Slavin's MESSENGER research was funded by NASA and is the subject of a paper that appeared in the journal Science on May 1, 2009.

MESSENGER is a NASA-sponsored scientific investigation of the planet Mercury and the first space mission designed to orbit the planet closest to the Sun. The MESSENGER spacecraft launched on August 3, 2004, and after flybys of Earth, Venus, and Mercury will start a yearlong study of its target planet in March 2011. Dr. Sean C. Solomon, of the Carnegie Institution of Washington, leads the mission as Principal Investigator. The Johns Hopkins University Applied Physics Laboratory, Laurel, Md., built and operates the MESSENGER spacecraft and manages this Discovery-class mission for NASA.