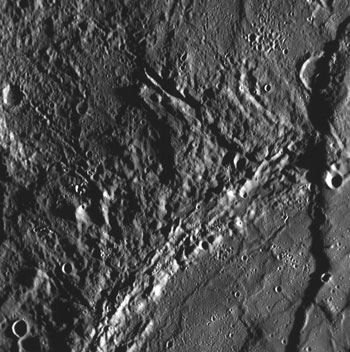 Click image to enlarge.
As the MESSENGER team continues to study the high-resolution images taken during the Mercury flyby encounter on January 14, 2008, scarps (cliffs) that extend for long distances are discovered. This frame, taken by the Narrow Angle Camera (NAC) of the Mercury Dual Imaging System (MDIS), shows a region of Mercury's surface previously unseen by spacecraft and a large scarp crossing vertically through the scene, on the far right of the image. This scarp is the northern continuation of the one seen in the NAC image released on January 16. The width of this image is about 200 kilometers (about 125 miles), showing that these scarps can be hundreds of kilometers long on Mercury.

The presence of many long and high scarps, as discovered from pictures from the Mariner 10 mission in 1974 and 1975, suggests a history for Mercury that is unlike that of any of the other planets in the solar system. These giant scarps are believed to have formed when Mercury’s interior cooled and the entire planet shrank slightly as a result. However, Mariner 10 was able to view less than half the planet, so the global extent of these scarps has been unknown. MESSENGER images, like this one, are providing the first high-resolution looks at many areas on Mercury's surface, and science team members are busy mapping these newly discovered scarps to see whether they are common everywhere on the planet. Mission Elapsed Time (MET) of image: 108826206