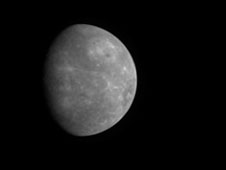 The Narrow Angle Camera (NAC), part of the Mercury Dual Imaging System (MDIS), took images of the planet as the spacecraft departed.
› View Movie
› Multimedia Page  →
The recent flyby of Mercury by NASA's MESSENGER spacecraft has given scientists an entirely new look at a planet once thought to have characteristics similar to those of Earth's moon. Researchers are amazed by the wealth of images and data that show a unique world with a diversity of geological processes and a very different magnetosphere from the one discovered and sampled more than 30 years ago.

After a journey of more than 2 billion miles and three and a half years, NASA's MErcury Surface, Space ENvironment, GEochemistry, and Ranging (MESSENGER) spacecraft made its first flyby on Jan. 14. MESSENGER is the first mission sent to orbit the planet closest to our sun. The spacecraft's cameras and other sophisticated, high-technology instruments collected more than 1,200 images and made other science observations. Data included the first up-close measurements of Mercury since the Mariner 10 spacecraft's third and final flyby on March 16, 1975.

"This flyby allowed us to see a part of the planet never before viewed by spacecraft, and our little craft has returned a gold mine of exciting data," said Sean Solomon, MESSENGER's principal investigator, Carnegie Institution of Washington. "From the perspectives of spacecraft performance and maneuver accuracy, this encounter was near-perfect, and we are delighted that all of the science data are now on the ground."

Unlike the moon, MESSENGER showed that Mercury has huge cliffs with structures snaking up hundreds of miles across the planet's face. These cliffs preserve a record of patterns of fault activity from early in the planet's history. The spacecraft also revealed impact craters that appear very different from lunar craters.

Instruments provided a topographic profile of craters and other geological features on the night side of Mercury. The spacecraft also discovered a unique feature that scientists dubbed "The Spider." This formation never has been seen on Mercury before and nothing like it has been observed on the moon. It lies in the middle of a large impact crater called the Caloris basin and consists of more than one hundred narrow, flat-floored troughs radiating from a complex central region.

"The Spider has a crater near its center, but whether that crater is related to the original formation or came later is not clear at this time," said James Head, science team co-investigator at Brown University, Providence, R.I.

Now that MESSENGER has shown scientists the full extent of the Caloris basin, its diameter has been revised upward from the Mariner 10 estimate of 800 miles to perhaps as large as 960 miles from rim to rim. The plains inside the Caloris basin are distinctive and more reflective than the exterior plains. Impact basins on the moon have opposite characteristics.

Magnetic fields like Earth's and their resulting magnetospheres are generated by electrical dynamos in the form of a liquid metallic outer core deep in the planet's center. Of the four terrestrial planets, only Mercury and Earth exhibit such a phenomenon. The magnetic field deflects the solar wind from the sun, producing a protective bubble around Earth that shields the surface of our planet from those energetic particles and other sources farther out in the galaxy. Similar variations are expected for Mercury's magnetic field, but the precise nature of its field and the time scales for internal changes are unknown. The next two flybys and the yearlong orbital phase will shed more light on these processes.

MESSENGER's suite of instruments also has provided insight into the mineral makeup of the surface terrain and detected ultraviolet emissions from sodium, calcium and hydrogen in Mercury's exosphere. The spacecraft explored the sodium-rich exospheric "tail," which extends more than 25,000 miles from the planet.

"We should keep this treasure trove of data in perspective. With two flybys to come and an intensive orbital mission to follow, we are just getting started to go where no one has been before," said project scientist Ralph McNutt of the Applied Physics Laboratory, Laurel, Md.