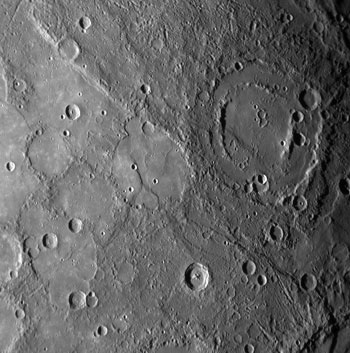 Click image to enlarge.
NASA’s MESSENGER spacecraft’s closest approach to Mercury on January 14, 2008, acquired this image as part of a mosaic that covers much of the sunlit portion of a hemisphere not view by previous spacecraft. Images such as this can be read in terms of a sequence of geological events and provide insight into the relative timing of processes that have acted on Mercury's surface in the past.

The double-ringed crater pictured in the upper right of this image appears to be filled with smooth plains material, perhaps volcanic in nature. This crater was subsequently disrupted by the formation of a prominent cliff, the surface expression of a major crustal fault system that runs alongside part of its southern rim. This may have led to the uplift seen across a portion of the crater’s floor. A smaller crater in the upper left of the image also has been cut by the cliff, showing that the fault beneath the cliff was active after both of these craters had formed. Credit: NASA/Johns Hopkins University Applied Physics Laboratory/Carnegie Institution of Washington