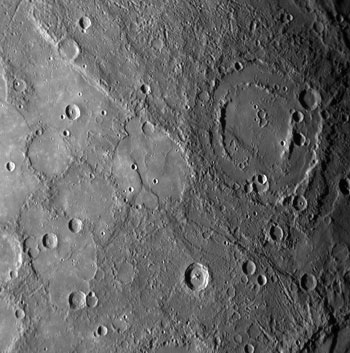 Click image to enlarge.
As MESSENGER sped by Mercury on January 14, 2008, the Narrow Angle Camera (NAC) of the Mercury Dual Imaging System (MDIS) captured this image before its closest approach with the planet. The scene is near Mercury's terminator (the line between the sunlit day side and dark night side of the planet), where shadows are long and height differences accentuated, revealing rising crater walls that tower over the floors below. The large crater situated on the right side in the bottom half of the image is Sullivan crater, a structure about 135 kilometers (84 miles) in diameter also seen during the Mariner 10 mission. An influential American architect, Louis Sullivan and his work are often associated with the rise of modern skyscrapers, and this crater named in his honor finds a fitting home in Mercury's ancient geological architecture. Mission Elapsed Time (MET) of image: 108821402