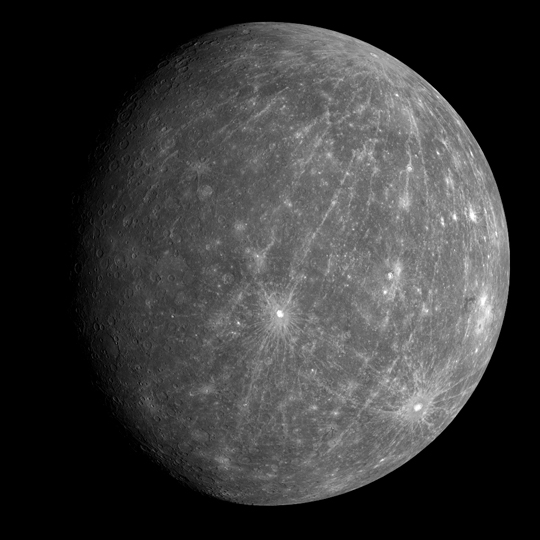 On Oct. 6, 2008, at 4:40 a.m. ET, MESSENGER successfully completed its second flyby of Mercury. The next day, at about 1:50 a.m. ET, the images taken during the flyby encounter began to be received back on Earth. The spectacular image shown here is one of the first to be returned and shows a WAC image of the departing planet taken about 90 minutes after the spacecraft’s closest approach to Mercury. The bright crater just south of the center of the image is Kuiper, identified on images from the Mariner 10 mission in the 1970s. For most of the terrain east of Kuiper, toward the limb (edge) of the planet, the departing images are the first spacecraft views of that portion of Mercury’s surface. A striking characteristic of this newly imaged area is the large pattern of rays that extend from the northern region of Mercury to regions south of Kuiper. This extensive ray system appears to emanate from a relatively young crater newly imaged by MESSENGER, providing a view of the planet distinctly unique from that obtained during MESSENGER’s first flyby. This young, extensively rayed crater, along with the prominent rayed crater to the southeast of Kuiper, near the limb of the planet, were both seen in Earth-based radar images of Mercury but not previously imaged by spacecraft.
› Back To Top