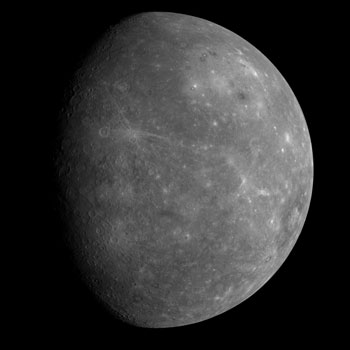 Click on image to enlarge.
This image was taken today by NASA's MESSENGER spacecraft at a distance of approximately 17,000 miles following the spacecraft's closest approach to Mercury. The image shows features as small as 6 miles in size. Similar to previously mapped portions of Mercury, this hemisphere appears heavily cratered. It also reveals some unique and distinctive features. On the upper right is the giant Caloris basin, including its western portions never before seen by spacecraft. Formed by the impact of a large asteroid or comet, Caloris is one of the largest, and perhaps one of the youngest basins in the solar system. Credit: NASA/Johns Hopkins University Applied Physics Laboratory/Carnegie Institution of Washington

> The Applied Physics Lab's Mercury flyby page
›Back To Top