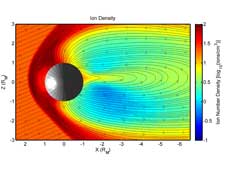 > View larger image
As the solar wind encounters Mercury, it slows down, piles up and flows around the planet (gray ball). This figure shows the density of protons from the solar wind, as calculated by modeling of the planet's magnetic sheath, or magnetosphere. The highest density, indicated by red, is on the side facing the sun; yellow indicates a lower density, and dark blue is the lowest. Credit: NASA/GSFC/Mehdi Benna Pity poor Mercury. The tiny planet endures endless assaults by intense sunlight, powerful solar wind and high-speed miniature meteoroids called micrometeoroids. The planet's flimsy covering, the exosphere, nearly blends in with the vacuum of space, making it too thin to offer protection. Because of this, it's tempting to think of Mercury's exosphere as just the battered remains of ancient atmosphere. Really, though, the exosphere is constantly changing and being renewed with sodium, potassium, calcium, magnesium and other species that are liberated from Mercury's soil by barrages of particles. Because both these particles and Mercury's surface materials respond to sunlight, the solar wind, Mercury's own magnetic sheath (the magnetosphere) and other dynamic forces, the exosphere may not look the same from one observation to the next. Far from being dead, Mercury's exosphere is a place of amazing activity that can tell astronomers a lot about the planet's surface and environment.

Three related papers written by scientists at NASA's Goddard Space Flight Center in Greenbelt, Md., and their colleagues offer insight into the details of how the exosphere gets replenished and show that new modeling of the magnetosphere and exosphere can explain some intriguing observations of the planet. These papers are published as part of Icarus's September 2010 special issue devoted to observations of Mercury during the first and second flybys of the MESSENGER (short for MErcury Surface, Space ENvironment, GEochemistry, and Ranging) spacecraft.

1. Mercury's substitute. No spacecraft have been able to land on Mercury, so astronomers have to figure out indirectly what's in the planet's soil. One approach is to study Earth's moon. Like Mercury, the moon has a very thin exosphere, and on both bodies, the same processes drive species from the surface and into the exosphere. So when Goddard's Rosemary Killen, an expert on both exospheres, and her colleagues wanted to find out what kind of soil could give rise to the concentrations of sodium and potassium found in Mercury's exosphere, they looked at lunar samples. Their best match? Samples brought back by Russia's Luna 16 spacecraft. 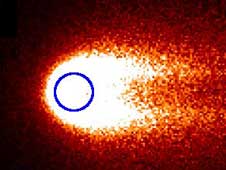 > View movie
The amount of sodium in Mercury's exosphere depends on the planet's position in its orbit around the sun. In this image, the large whitish-reddish mass is the sodium in exosphere around Mercury (dark blue circle). In the upper left corner, Mercury's position (purple ball) in its orbit (light blue circle) around the sun (yellow ball) is shown. (TAA stands for true anomaly angle—the angle between Mercury, the sun, and the closest point to the sun along the orbit, which is known as the perihelion point.) As Mercury orbits, the distance between the planet and the sun changes and so does the speed at which Mercury is moving relative to the sun. These changes, in turn, affect both the brightness of the sodium emission and the amount of radiation pressure a sodium atom experiences. These factors yield the greatest amount of sodium in the exosphere when Mercury is at a middle distance from the sun. This still image was taken from an animation showing the seasonal effects of sodium in Mercury's exosphere. (For the animation, a simple, uniform source of sodium is assumed.) Credit: NASA/GSFC/Matthew Burger 2. Going their separate ways. The atoms and molecules in Earth's atmosphere bounce around and collide all the time, but this doesn't happen much in Mercury's exosphere. Instead, the species tend to follow their own paths and are actually more likely to collide with the planet's surface than with each other. A combination of observations from Earth-based telescopes and recent MESSENGER data show that sodium, calcium and magnesium are released from the surface by different processes and behave very differently in the exosphere, notes Killen, a member of the MESSENGER science team.

3. The power of sunlight. New modeling revealed a surprising force releasing most of the sodium into Mercury's exosphere and tail. Researchers had expected the main factor to be charged particles hitting the surface and releasing sodium in a process called ion sputtering. Instead, the main factor seems to be photons releasing sodium in a process called photon-stimulated desorption (PSD), which may be enhanced in regions impacted by ions. This modeling was done by Matthew Burger, a University of Maryland Baltimore County (UMBC) research scientist working at Goddard with Killen, and colleagues using data from the first and second MESSENGER flybys. Sunlight pushes sodium atoms away from the planet's surface to form the long comet-like tail. "The radiation acceleration is strongest when Mercury is at a middle distance from the sun," says Burger. "That's because Mercury is traveling fastest at that point in its orbit, and this is one of the factors that determines how much pressure the sun's radiation exerts on the exosphere." Impacts by micrometeoroids also contribute up to 15% of the sodium observed.

4. Harsher in the north. Much of the sodium is observed at the north and south poles of Mercury, but a lopsided distribution was found during the first MESSENGER flyby: sodium emissions were 30% stronger in the northern hemisphere than the southern one. Modeling of Mercury's magnetosphere done by Mehdi Benna, a UMBC scientist working at Goddard and a member of the MESSENGER science team, and colleagues may help explain this observation. The model reveals four times more protons hitting Mercury near the north pole than near the south pole. More strikes means that more sodium atoms could be liberated by ion sputtering or PSD; it's enough of a difference to explain the observations. "This happens because the magnetic field coming from the sun was tilted during the Mercury flyby. The field wasn't symmetric when it wrapped around Mercury," Benna says. "This configuration exposed the north polar region of the planet to more solar wind particles than the south polar region."

5. Shifting into high gear. Burger adds that the increase in charged particles near the north pole works together with the photons involved in PSD. "PSD affects just the outer surface of the grains of soil. The surfaces become depleted quickly and release a limited amount of sodium," he explains. More sodium has to travel from the inside of each grain to the surface, and that takes some time. "But the increase in charged particles at the north pole speeds up this whole process, so more sodium is released more quickly."

6. Particles in the groove. After protons from the solar wind bombard Mercury's surface and free species from the soil, intense sunlight can strike those liberated materials and convert them into positive ions (the process of photoionization). Modeling by Benna and colleagues reveals that some of these ions may be able to travel around the planet in a "drift belt," perhaps making half a loop or perhaps going around several times before exiting the belt. "If this drift belt exists and if the concentration of ions in the drift belt is high enough, it may create a magnetic depression in this region," he explains. MESSENGER science team members noticed a dip in the magnetic field on both sides of the planet. "But so far, we can't say that a drift belt caused this dip," Benna notes. "Models by us and by other researchers tell us that a drift belt can form, but are there enough ions there to cause a dip in the magnetic field? We don't know yet."

7. Maverick magnesium. The MESSENGER spacecraft was the first to find magnesium in Mercury's exosphere. Killen, a member of the MESSENGER science team, says that astronomers expected the concentration of magnesium to be greatest at the surface and to taper off with distance in the usual manner (exponential decay). Instead, she and her colleagues found that the concentration of magnesium over the north pole during the third flyby "was hanging there at a constant density, and then all of the sudden, it dropped like a rock," she says. "This was just a total surprise, and it's the only time we've seen this odd distribution." What's more, Killen says, the temperature of this magnesium can reach tens of thousands of degrees Kelvin, which is far above the surface temperature of 800 °F. The processes that were expected to be at work on the planet's surface probably can't account for this. "Only a very high-energy process can produce magnesium that is so hot," she adds, "and we don't know what that process is yet."

The Johns Hopkins University Applied Physics Laboratory built and operates the MESSENGER spacecraft and manages this Discovery-class mission for NASA.