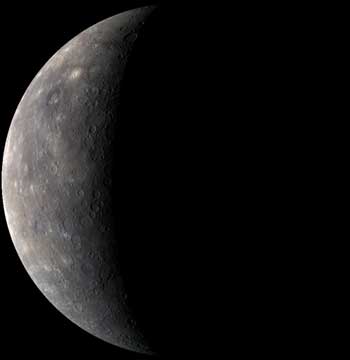 A MESSENGER color observation of Mercury obtained as the spacecraft approached the planet for its third and final flyby on 29 September 2009. The 1000, 700, and 430 nm filters were combined in red, green, and blue to create this color image (approximately 5 km/pixel resolution), the last that will be acquired until MESSENGER goes into orbit around Mercury in March of 2011. Only 6% of Mercury's surface in this image had not been viewed previously by spacecraft, and most of the measurements made by MESSENGER's other instruments during this flyby were made prior to closest approach. The observations nonetheless revealed fresh surprises. 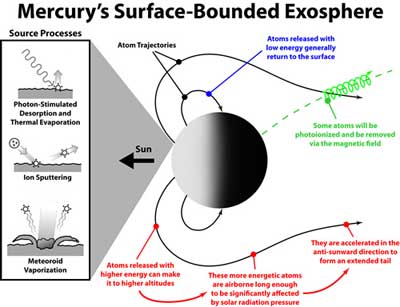 Illustration of the major source and loss processes that generate and maintain Mercury’s exosphere. The panels on the left summarize the three primary sources of exospheric material. Photon-stimulated desorption occurs when solar photons excite surface-bound atoms or molecules, releasing them to the exosphere. Sunlight also heats the surface, causing atoms and molecules to evaporate. These are both low-energy processes, so most of the released material reaches only low altitudes and usually returns to the surface. Ion sputtering occurs when ions from the solar wind or Mercury’s magnetosphere impact the surface, “knocking off” atoms and molecules. Meteoroid vaporization occurs when incoming meteoroids, generally small dust particles, impact Mercury’s surface at high speeds, causing the surface material to vaporize. Both ion sputtering and meteoroid vaporization are high-energy processes and the released material can reach high altitudes. All the material in the exosphere is accelerated in the anti-sunward direction by radiation pressure; atoms and molecules at high enough altitudes for this force to overcome the gravitational influence of the planet enter Mercury’s neutral tail. Neutral constituents in the tail either escape the Mercury system or are ionized by solar radiation. The ionized material can also escape along open magnetic field lines but some of the ions are returned to the surface by Mercury’s magnetosphere. 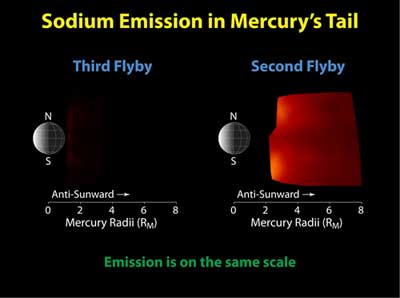 Comparison of neutral sodium observed during MESSENGER’s second and third Mercury flybys. The left panel shows that emission from neutral sodium in Mercury’s tail, which extends away from the planet in the anti-sunward direction, was a factor of 10-20 less than during the second flyby. This difference is due to variations in the pressure that solar radiation exerts on the sodium as Mercury moves in its orbit. During the third flyby, the net effect of radiation pressure was small, and the sodium atoms released from Mercury’s surface were not accelerated anti-sunward as they were during the first two flybys, resulting in a diminished sodium tail. These predictable changes lead to what are effectively “seasonal” effects on the distribution of exospheric species. 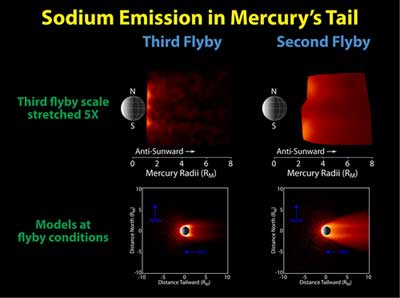 Comparison of the neutral sodium observed during the second and third Mercury flybys to models. The top left and right panels show the same images as in Image 2.2, but the color scale for the third flyby has been stretched to show the distribution of sodium more clearly. As in previous flybys, the distinct north and south enhancements in the emission that result from material being sputtered from the surface at high latitudes on the dayside are seen. The lower two panels show Monte Carlo models of the sodium abundance in Mercury’s exosphere for conditions similar to those during the two flybys. These models illustrate that the “disappearance” of Mercury’s neutral sodium tail is consistent with the change in conditions. Observations of the sodium exosphere and tail throughout Mercury’s orbit during MESSENGER’s orbital mission phase will enable such “seasonal” effects to be studied. Refinement of models similar to these will lead to an improved understanding of the source and loss processes and their variations among Mercury’s different exospheric “seasons.” 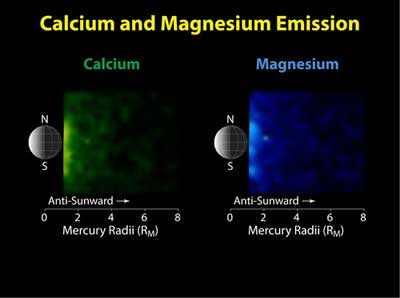 Observations of calcium and magnesium in Mercury’s neutral tail during the third MESSENGER flyby. The distribution of neutral calcium in the tail appears to be centered near the equatorial plane and the emission rapidly decreases to the north and south as well as in the anti-sunward direction. In contrast, the distribution of magnesium in the tail exhibits several strong peaks in emission and a slower decrease in the north, south, and anti-sunward directions. These distributions are similar to those seen during the second flyby, but the densities were higher during the third flyby, a different “seasonal” variation than for sodium. Studying the changes of the “seasons” for a range of species during MESSENGER’s orbital mission phase will be key to quantifying the processes that generate and maintain the exosphere and transport volatile material within the Mercury environment. 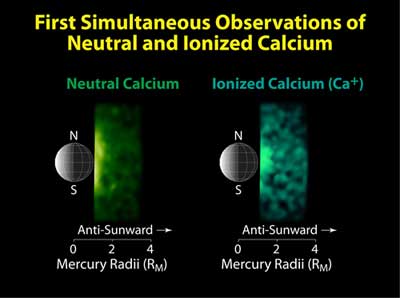 First observations of emission from ionized calcium in Mercury’s tail region compared with simultaneous observations of neutral calcium. Neutral calcium is rapidly converted to ionized calcium by sunlight, explaining the generally rapid decrease of neutral calcium away from the planet. The high degree of correlation between the two observed distributions reflects the rapid conversion of neutrals to ions and demonstrates that ionized calcium represents a significant fraction of the overall calcium abundance. Simultaneous measurement of the abundances of calcium neutrals and ions is therefore necessary to measure the total calcium abundance in Mercury’s exosphere accurately. This situation is in contrast to that for sodium and magnesium, which are ionized much more slowly. The significantly longer lifetime for neutral magnesium may explain why its abundance is more widely distributed in the tail region when compared to calcium (Image 2.4). 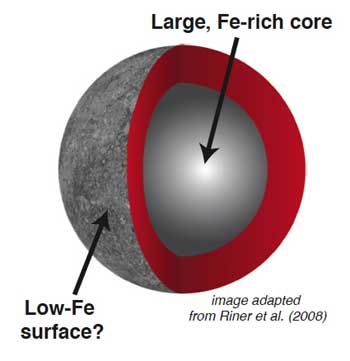 Schematic view of Mercury’s interior showing its large, iron-rich core, which constitutes at least ~60% of the planet’s mass. Observations from Earth and by MESSENGER at visible and near-infrared wavelengths have shown that Mercury’s surface has a very low concentration of iron (Fe) in silicate minerals, leading to the common view that Mercury’s surface and crust are generally low in iron. A puzzle for investigations of Mercury’s formation and evolution is how a planet with such a large Fe-rich core could form with such an Fe-poor surface? 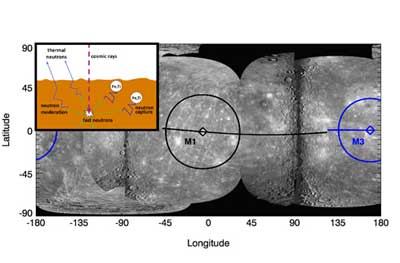 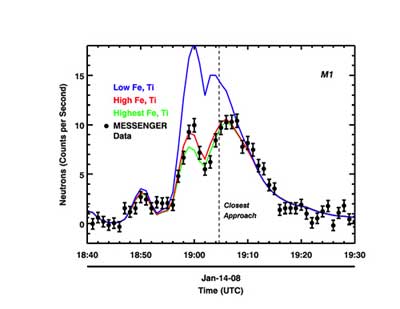 Modeled and measured neutron counting rates for M1. The solid lines show predicted neutron counting rates for three different composition models: low Fe and Ti (blue), high Fe and Ti (red), and highest Fe and Ti (green). The low Fe and Ti model similar in composition to the lunar highlands. The high and highest Fe and Ti models are similar in composition to lunar basalts from Mare Fecunditatis (Luna 16) and Mare Tranquillitatis (Apollo 11), respectively. A spacecraft maneuver was executed at 19:00 UTC that enabled the NS to measure an enhanced signal of thermal neutrons. The NS data (black circles) show that Mercury’s surface fits the model with high Fe and Ti abundances, in contrast to previous ideas that Mercury’s surface is low in Fe and Ti. 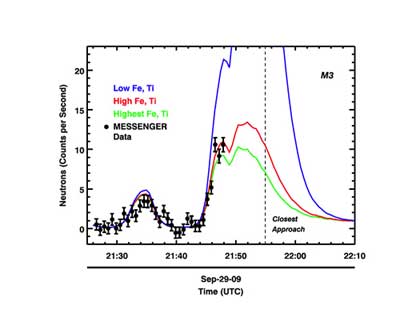 Modeled and measured neutron counts for M3. While the data stop prior to 21:50 UTC because of the spacecraft safing event that shut off all data collection, enough NS data were returned to again show that Mercury’s surface fits the model with high abundances of Fe and Ti. These results from both M1 and M3 demonstrate that Mercury’s surface has a significantly higher Fe+Ti content than was previously appreciated. Models for Mercury’s formation and crustal evolution must be revised to take this finding into account. 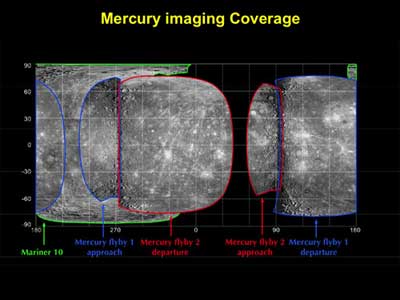 Combined image coverage map of Mercury after Mariner 10 and MESSENGER’s first two flybys of Mercury. Although 90% of Mercury’s surface had been imaged after MESSENGER’s second flyby, there was a gap in longitudinal coverage centered at about 60° E. 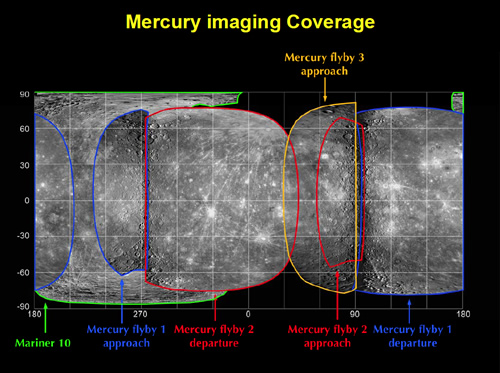 Image coverage map of Mercury after the third MESSENGER flyby. The approach trajectory of the third flyby allowed the longitudinal gap to be seen as a part of a mosaic created from 58 images. The nearly complete (98%) coverage now leaves unimaged only portions of the polar regions before MESSENGER is placed into orbit about Mercury in March 2011. Despite the now-complete equatorial coverage, it is worth noting that illumination conditions were far from uniform during the various flybys, and images of many areas did not favor observations of surface texture and topography. Imaging of these areas from orbit under more optimum lighting conditions and higher resolution will improve our understanding of the evolution of Mercury’s surface. 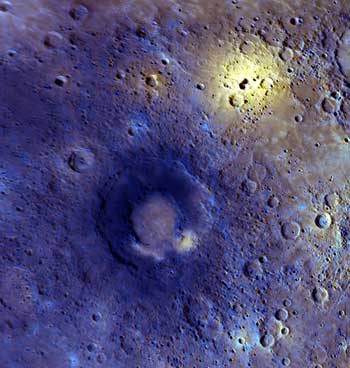 Selected features revealed during MESSENGER’s third flyby. This enhanced-color view was created with a statistical technique that highlights subtle color variations seen in the 11 filters of MESSENGER’s wide-angle camera that are often related to composition. Merged with images from the higher-resolution narrow-angle camera, the two sets of observations tell the story of the geology of the area and the compositional differences of the features observed. This region, viewed in detail for the first time during the third flyby, appears to have experienced a high level of volcanic activity. The bright yellow area near the top right is centered on a rimless depression (Image 4.4) that is a candidate site for an explosive volcanic vent. The 290-km-diameter double-ring basin in the center of the image has a smooth interior (Image 4.5) that may be the result of effusive volcanism. Smooth plains, thought to be a result of earlier episodes of volcanic activity, cover much of the surrounding area. Image resolution is 1 km/pixel. 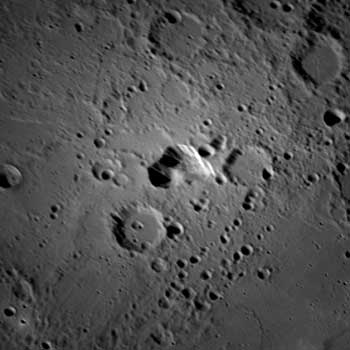 Detailed view of the irregular depression in Image 4.3. This region of high reflectance was just barely seen on the limb during MESSENGER’s second flyby, but without enough detail to characterize it as anything other than a bright spot. A more favorable viewing angle reveals this bright spot to be an irregular rimless depression approximately 30 km across surrounded by highly reflective material. Its features are distinctly different from those of impact craters and, though its origin remains ambiguous, it is suspected to be volcanic. The high-reflectance halo surrounding this enigmatic feature is distinct in color (see Image 4.3) and may represent a pyroclastic deposit greater than 150 km in diameter. 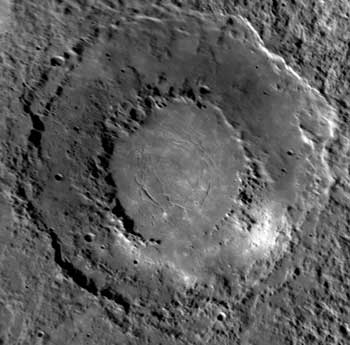 Detailed view of the interior of the double-ring basin in Image 4.3. This spectacular 290-km-diameter double-ring basin seen in detail for the first time during MESSENGER’s third flyby of Mercury bears a striking resemblance to the Raditladi basin, observed during the first flyby. This still-unnamed basin is remarkably well preserved and appears to have formed relatively recently, compared with most basins on Mercury. The low numbers of superposed impact craters and marked differences in color across the basin suggest that the smooth area within the innermost ring may be the site of some of the most recent volcanism on Mercury. MESSENGER’s final flyby of Mercury brings to the fore the importance of the orbital phase of the mission that begins 18 March 2011!

The NASA MESSENGER Science Update will take place on Tuesday, November 3, 2009, at 1 p.m. EST. Reporters may ask questions from participating NASA locations. The briefing also will be streamed live on NASA's Web site at: http://www.nasa.gov.