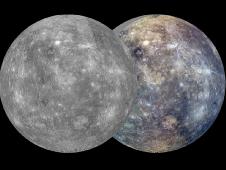 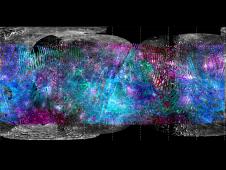 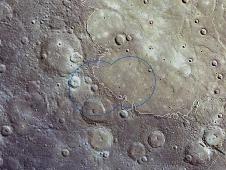 A Northern Footprint
Full Image and Caption Scientists highlighted new Mercury discoveries obtained during MESSENGER’s first six months (the first Mercury solar day) in the planet’s orbit. These findings were presented October 5 in 30 papers and posters as part of a special session of the joint meeting of the European Planetary Science Congress and the Division for Planetary Sciences of the American Astronomical Society in Nantes, Frances.

Scientists will also look ahead to MESSENGER observations still to come and to the dual-spacecraft BepiColombo mission of the European Space Agency and the Japan Aerospace Exploration Agency's later this decade.

"This is the first major scientific meeting at which MESSENGER orbital observations are being presented to the scientific community," says MESSENGER Principal Investigator Sean Solomon of the Carnegie Institution of Washington. "As the first spacecraft to orbit our solar system's innermost planet, MESSENGER continues to reveal new surprises every week. It is timely to sum up what we've learned so far and to seek feedback from our international colleagues across planetary science on our interpretations to date."

After three successful flybys of Mercury, the MESSENGER spacecraft entered orbit about the innermost planet on March 18, 2011. The orbital phase of the mission is enabling the first global perspective on the planet's geology, surface composition, topography, gravity and magnetic fields, exosphere, magnetosphere, and solar-wind interaction.

The magnetic and gravity fields of Mercury are the primary clues scientists have on the structure deep in the interior of the planet, which in turns helps develop general theories for how planets form and evolve. Orbital data reveal that Mercury's magnetic field is offset far to the north of the planet's center, by nearly 20% of Mercury's radius. Relative to the planet's size, this offset is much more than in any other planet, and accounting for it will pose a challenge to theoretical explanations of the field.

"Although we don't know how to explain that yet — it is no doubt an important clue to the workings of Mercury's dynamo," says Brian Anderson, MESSENGER Deputy Project Scientist and a space physicist at the Johns Hopkins University Applied Physics Laboratory (APL) in Laurel, Md.

This finding has several implications for other aspects of Mercury, says Anderson, who co-authored several of the presentations in the MESSENGER session. "This means that the magnetic field in the southern hemisphere should be a lot weaker than it is in the north. At the north geographic pole, the magnetic field should be about 3.5 times stronger than it is at the south geographic pole.

"The big difference in northern and southern surface field strengths means that energetic particles, solar wind, and high-energy electrons will preferentially impact the surface in the south, and this situation should lead to asymmetries both in sources of atoms, ions, and molecules for Mercury's exosphere and in the discoloration of the surface by charged particle bombardment," he continues. "Both should occur more strongly in the south."

The Dynamics of Mercury's Exosphere

MESSENGER's observations during the flybys and orbit show that the current understanding of the nature of Mercury's exosphere is incomplete, says William McClintock, a MESSENGER mission co-investigator and senior scientist at the Laboratory for Atmospheric and Space Physics, University of Colorado, Boulder.

"They show that distinctly different source and loss processes control the populations of the major constituents of sodium, magnesium, and calcium atoms in the exosphere," says McClintock.

Before MESSENGER, the prevailing theory suggested that material was released from the dayside by solar wind and radiation. In this picture, lofted material then was carried to the nightside by solar radiation pressure. MESSENGER measurements show that magnesium and calcium in the tail region are substantially more abundant than would be expected if they were produced in this way, he points out.

New magnetic field models, derived from MESSENGER's Magnetometer data, indicate that the planet's intrinsic field can couple with the interplanetary field to direct solar wind ions to the nightside, sputtering material from non-illuminated surfaces. But that source is too weak to explain the observed concentrations. Calcium also exhibits an unexplained enhanced concentration at the equator near dawn, a pattern that appears to be a persistent feature in the exosphere. Such dawn enhancements are not observed for magnesium, which is chemically similar to calcium.

The Evolution of Mercury's Geological and Surface Composition

After its first Mercury solar day in orbit, MESSENGER has nearly completed two of its primary global imaging campaigns: a monochrome map at 250 meters per pixel and an eight-color, 1 kilometer per pixel color map. Apart from small gaps, which will be filled in during the next solar day, these maps cover the entire planet under uniform lighting conditions ideal for assessing the form of Mercury's surface features as well as the color and compositional variations across the planet.

Flybys of Mercury by the MESSENGER and Mariner 10 spacecraft showed broad expanses of plains across the planet. There was strong evidence for a volcanic origin of many of these plains, indicating that volcanism played an important role in shaping Mercury's crust; but large regions of the planet remained unmapped, and the origin of many plains units had until now remained ambiguous.

"With images from MESSENGER's orbital mapping campaigns, as well as targeted high-resolution images, we can now begin to assess the origin of plains on a global basis, and — when combined with data from MESSENGER's X-Ray Spectrometer — their compositional variation," says Brett Denevi, a planetary scientist in APL's Space Department.  "We find that volcanic rocks dominate much of Mercury's crust, even in regions that are geologically complex and where impact cratering has destroyed many of the original surface features."

The X-Ray Spectrometer collects compositional information averaged over relatively large regions on Mercury's surface, and signals diagnostic of the heavier elements are received only during times of high solar activity. For regions where geologic mapping and detailed compositional information are both available, many of the large-scale volcanic units on Mercury are seen to be basaltic. Basalts are common volcanic rocks on Earth and the Moon.

Over the course of the first solar day in orbit, the Visible and Infrared Spectrograph (VIRS) channel of the Mercury Atmospheric and Surface Composition Spectrometer (MASCS) obtained over one million spectra of the surface from near one pole to the other and spanning all longitudes. VIRS observed all the major geologic units and structures, from large basins to small fresh-looking craters, and from average pains to hollows and possible pyroclastic materials. Whereas the Mercury Dual Imaging System highlights the morphology and broad color characteristics of these materials, VIRS reveals greater details of the reflective properties of surface materials.

"One surprise that's been with us since the flybys is the apparent lack of iron in the silicate minerals of the rocks on the surface of the planet," says APL's Noam Izenberg, Instrument Scientist for the MASCS instrument on MESSENGER.

"In rock-forming silicates, the primary materials of most planetary crusts, iron shows up as a characteristic absorption at infrared wavelengths, but such features have been completely absent in spectra from Mercury," says Izenberg. The infrared continues to show very little spectral variation indicative of distinct mineralogies, and we are working hard to tease out what we can."

An important chapter of the story, however, appears to be at ultraviolet wavelengths, he says. "Iron in rocks also has effects in this region of the spectrum as well, but those effects are less well studied and understood. However it is here that we see variations among, for example, fresh-looking craters, plains, hollows, pyroclastic deposits, and low-reflectance units."

According to Izenberg, the variations in the ultraviolet may reflect both iron content and the type of rocks that hold it and may provide hints at other materials, such as sulfur, which have characteristic ultraviolet reflectance signatures as well. "Evidence from other instruments on MESSENGER, such as the X-Ray Spectrometer, corroborates low iron abundance near the surface and the presence of sulfur, so as our analyses advance we'll be working to correlate the findings across all instruments."

MESSENGER continues to send back data that illuminate Mercury's mysteries. The knowledge gained is already sharpening the mission goals of the dual-spacecraft BepiColombo mission, scheduled to launch to Mercury in 2014.

Members of the MESSENGER team met with BepiColombo scientists at Kyoto University in Japan last month to review the state of knowledge about Mercury and to present initial MESSENGER orbital results.

"We discussed many of the new findings that will be covered in the MESSENGER sessions today," says MESSENGER Project Scientist Ralph McNutt. "BepiColombo team members presented new perspectives on surface mineralogy from recent high-temperature laboratory measurements and new theories for Mercury's formation and for the generation of Mercury's magnetic field. This meeting continued a dialogue, begun more than a decade ago, on the synergies of the two investigations and how ongoing MESSENGER measurements are informing the planning for BepiColombo operations."