MESSENGER Has Imaged 100 Percent of Mercury 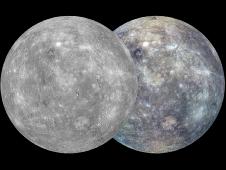 Global Coverage
Full Image and Caption The Mercury Dual Imaging System (MDIS) on the MESSENGER spacecraft, in orbit about Mercury for nearly two years, has finally imaged 100 percent of the planet. Until recently, explains Brett Denevi of the Johns Hopkins University Applied Physics Laboratory (APL) in Laurel, Md., MDIS images acquired from orbit collectively covered most (99.99%), but not all, of the surface. The recent downlink of an image of the north polar region now completes the picture.

“It's a huge accomplishment – we've gone from having more than half of the planet a complete mystery prior to MESSENGER to a full coverage that will enable a better understanding of the global processes that shaped Mercury's formation and evolution,” says Denevi, the deputy instrument scientist for MDIS and a member of MESSENGER’s Geology Discipline Group. “But we've still only seen just a tiny fraction of the planet at the highest resolution, and we are learning more daily from color images, reflectance spectra, geochemical measurements, and topographic information – none of which have anywhere close to 100% coverage, and all of which will be important aspects of a second extended mission at Mercury.”

During its one-year primary mission, MESSENGER acquired 88,746 images and extensive other data sets. It is now nearing completion of a yearlong extended mission, during which the spacecraft has acquired more than 80,000 additional images and other measurements to support MESSENGER's science goals.

“Completing the initial imaging of the entire surface of our solar system’s innermost planet is an important milestone,” adds MESSENGER Principal Investigator Sean Solomon, of Columbia University’s Lamont-Doherty Earth Observatory. “Those global images have produced many important discoveries about how Mercury’s crust formed and evolved, but all of those discoveries have raised new questions.  With ongoing and planned targeted observations, conducted synergistically with all of MESSENGER’s instruments, we can look forward to further discoveries and new understanding.”