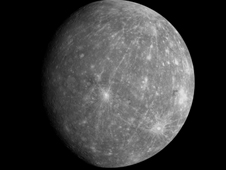 Of Interest:This high-resolution mosaic of NAC images shows Mercury as it appeared to MESSENGER as the spacecraft departed the planet after the mission's second flyby of Mercury. This mosaic resembles one of the first images received back at Earth following that flyby, an image that showed for the first time the spectacular rays of Hokusai crater extending great distances across Mercury's surface. The MESSENGER mission is on track to again make new discoveries and in 38 days to become the first spacecraft ever to orbit Mercury.