Plan for Getting Mars Rover Moving 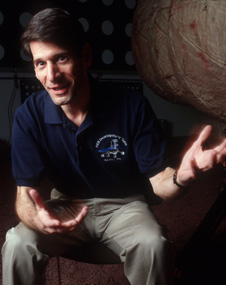 John L. Callas Image credit: NASA/JPL
John L. Callas, of NASA's Jet Propulsion Laboratory, Pasadena, Calif., has been project manager of NASA's Mars Exploration Rover project since March 2006. Previously, as science manager and then deputy project manager, he had helped lead the rover project since 2000. Callas grew up near Boston, Mass. He received his Bachelor's degree in Engineering from Tufts University, Medford, Mass., in 1981 and his Masters and Ph.D. in Physics from Brown University, Providence, R.I., in 1983 and 1987, respectively. He joined JPL to work on advanced spacecraft propulsion, which included such futuristic concepts as electric, nuclear and antimatter propulsion. In 1989 he began work supporting the exploration of Mars with the Mars Observer mission and has since worked on seven Mars missions. In addition to his Mars work, Callas is involved in the development of instrumentation for astrophysics and planetary science, and teaches mathematics at Pasadena City College as an adjunct faculty member. 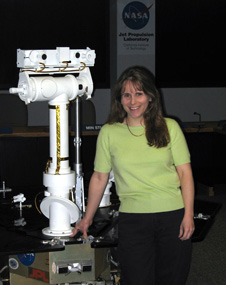 Ashley Stroupe Image credit: NASA/JPL
Ashley Stroupe has been a staff engineer at JPL since December 2003. She works in flight operations for the Mars Exploration Rovers, building sequences for rover driving and operating the robotic arm as well as doing long-term planning for rover traverse. She is also working on the development of the flight mission Mars Science Laboratory, evaluating terrain near potential landing sites. Her research focuses on multi-robot teams in complex environments and behavior-based control, with applications to exploration and mapping, dynamic target observation, and cooperative manipulation. In addition to the research listed here, Stroupe participates broadly in community activities such as outreach and education and has published multiple conference papers, book chapters, and journal articles in robotics. She recently appeared on "Five Years on Mars" on the National Geographic Channel. Stroupe received a Ph.D. in robotics from Carnegie Mellon University in Pittsburg, Pa., in 2003. 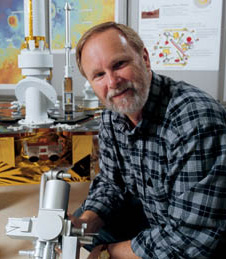 
Ray Arvidson is James S. McDonnell Distinguished University Professor and chair of the Department of Earth and Planetary Sciences at Washington University, St. Louis. He is deputy principal investigator for the science payload on NASA's Mars Exploration Rovers. In addition, Arvidson serves as an interdisciplinary scientist on NASA's Mars Global Surveyor, head of NASA's Planetary Data System Geosciences Node and a director of NASA's Regional Planetary Image Center. He has more than 100 publications dealing with remote sensing of Earth, Mars and Venus. He was science team leader for the imaging system on NASA's Viking Landers from 1977 to 1982. Arvidson attended high school in Williamstown, N.J., then earned a bachelor's degree in geology from Temple University, Philadelphia, and a doctorate in geological sciences from Brown University, Providence, R.I.