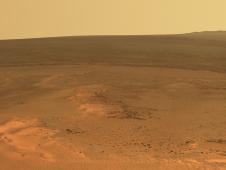 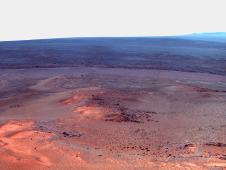 Eight years after landing on Mars for what was planned as a three-month mission, NASA's enduring Mars Exploration Rover Opportunity is working on what essentially became a new mission five months ago.

Opportunity reached a multi-year driving destination, Endeavour Crater, in August 2011. At Endeavour's rim, it has gained access to geological deposits from an earlier period of Martian history than anything it examined during its first seven years. It also has begun an investigation of the planet's deep interior that takes advantage of staying in one place for the Martian winter.

Opportunity landed in Eagle Crater on Mars on Jan. 25, 2004, Universal Time and EST (Jan. 24, PST), three weeks after its rover twin, Spirit, landed halfway around the planet. In backyard-size Eagle Crater, Opportunity found evidence of an ancient wet environment. The mission met all its goals within the originally planned span of three months. During most of the next four years, it explored successively larger and deeper craters, adding evidence about wet and dry periods from the same era as the Eagle Crater deposits.

The trek took three years. In a push to finish it, Opportunity drove farther during its eighth year on Mars -- 4.8 miles (7.7 kilometers) -- than in any prior year, bringing its total driving distance to 21.4 miles (34.4 kilometers).

The "Cape York" segment of Endeavour's rim, where Opportunity has been working since August 2011, has already validated the choice of Endeavour as a long-term goal. "It's like starting a new mission, and we hit pay dirt right out of the gate," Callas said.

The first outcrop that Opportunity examined on Cape York differs from any the rover had seen previously. Its high zinc content suggests effects of water. Weeks later, at the edge of Cape York, a bright mineral vein identified as hydrated calcium sulfate provided what the mission's principal investigator, Steve Squyres of Cornell University, Ithaca, N.Y., calls "the clearest evidence for liquid water on Mars that we have found in our eight years on the planet."

Mars years last nearly twice as long as Earth years. Entering its ninth Earth year on Mars, Opportunity is also heading into its fifth Martian winter. Its solar panels have accumulated so much dust since Martian winds last cleaned them -- more than in previous winters -- the rover needs to stay on a sun-facing slope to have enough energy to keep active through the winter.

The rover team has not had to use this strategy with Opportunity in past winters, though it did so with Spirit, farther from the equator, for the three Martian winters that Spirit survived. By the beginning of the rovers' fourth Martian winter, drive motors in two of Spirit's six wheels had ceased working, long past their design lifespan. The impaired mobility kept the rover from maneuvering to an energy-favorable slope. Spirit stopped communicating in March 2010.

All six of Opportunity's wheels are still useful for driving, but the rover will stay on an outcrop called "Greeley Haven" until mid-2012 to take advantage of the outcrop's favorable slope and targets of scientific interest during the Martian winter. After the winter, or earlier if wind cleans dust off the solar panels, researchers plan to drive Opportunity in search of clay minerals that a Mars orbiter's observations indicate lie on Endeavour's rim.

"The top priority at Greeley Haven is the radio-science campaign to provide information about Mars' interior," said JPL's Diana Blaney, deputy project scientist for the mission. This study uses weeks of tracking radio signals from the stationary rover to measure wobble in the planet's rotation. The amount of wobble is an indicator of whether the core of the planet is molten, similar to the way spinning an egg can be used to determine whether it is raw or hard-boiled.

Other research at Greeley Haven includes long-term data gathering to investigate mineral ingredients of the outcrop with spectrometers on Opportunity's arm, and repeated observations to monitor wind-caused changes at various scales.

The Moessbauer spectrometer, which identifies iron-containing minerals, uses radiation from cobalt-57 in the instrument to elicit a response from molecules in the rock. The half-life of cobalt-57 is only about nine months, so this source has diminished greatly. A measurement that could have been made in less than an hour during the rover's first year now requires weeks of holding the spectrometer on the target.

Observations for the campaign to monitor wind-caused changes range in scale from dunes in the distance to individual grains seen with the rover's microscopic imager. "Wind is the most active process on Mars today," Blaney said. "It is harder to watch for changes when the rover is driving every day. We are taking advantage of staying at one place for a while."

NASA's Jet Propulsion Laboratory, a division of the California Institute of Technology in Pasadena, manages the Mars Exploration Rover Project for the NASA Science Mission Directorate, Washington. More information about Opportunity is online at: http://www.nasa.gov/rovers and http://marsrovers.jpl.nasa.gov . You can follow the project on Twitter at http://www.twitter.com/marsrovers and on Facebook at http://www.facebook.com/marsrovers .