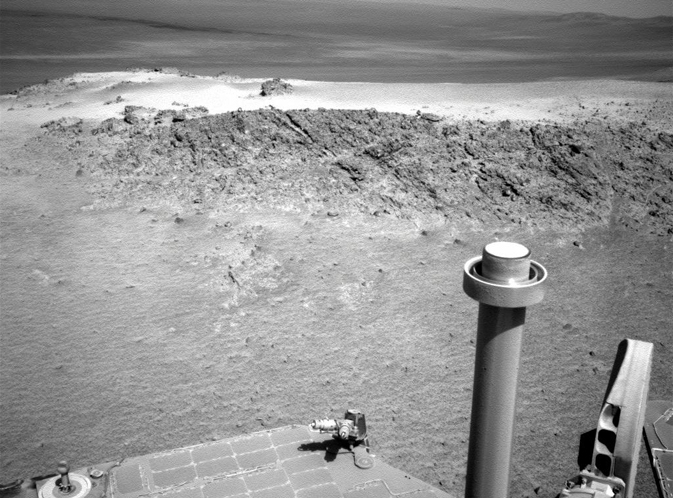 NASA's Mars Exploration Rover Opportunity used its navigation camera to capture this view of a northward-facing outcrop, "Greeley Haven," where the rover will work during its fifth Martian winter. Image credit: NASA/JPL-Caltech › Full image and caption 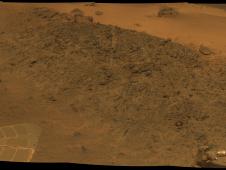 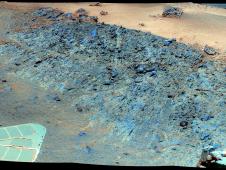 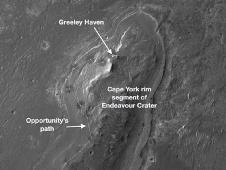 NASA's Mars Exploration Rover Opportunity will spend the next several months at a site informally named "Greeley Haven." The name is a tribute to planetary geologist Ronald Greeley (1939-2011), who was a member of the science team for the Mars rovers and many other interplanetary missions.

The site is an outcrop that provides a sun-facing slope to aid in maintaining adequate solar power during the rover's fifth Martian winter. It also provides targets of scientific interest for the rover's robotic arm to examine.

Closer to the equator than its twin rover, Spirit, Opportunity did not need to stay on a sun-facing slope during previous winters. Now, however, Opportunity's solar panels carry a thicker coating of dust than in the previous winters. Unless an unlikely wind cleans the panels in coming weeks, the team will use a strategy employed for three winters with Spirit: staying on a sun-facing slope. For several months of shortened daylight before and after the southern Mars winter solstice on March 30, 2012, the sun will pass relatively low in the northern sky from the rover's perspective, and Opportunity will work on the north-facing slope.

Plans for research at Greeley Haven include a radio-science investigation of the interior of Mars, which began this week; inspections of mineral compositions and textures on the outcrop; and recording a full-circle, color panorama: the Greeley Panorama. Greeley taught generations of planetary scientists at Arizona State University, Tempe, until his death two months ago.

The radio-science investigation studies tiny wobbles in the rotation of Mars to gain insight about the planet's core. It requires many weeks of radio-tracking the motion of a point on the surface of Mars to measure changes in the spin axis of the planet.

The winter worksite sits on the "Cape York" segment of the rim of Endeavour Crater. Opportunity reached the edge of this 14-mile-wide (22-kilometer-wide) crater five months ago after three years of driving from smaller Victoria Crater, which it studied for two years.

Opportunity and Spirit completed their three-month prime missions in April 2004 and continued for years of bonus, extended missions. Both rovers have made important discoveries about wet environments on ancient Mars that may have been favorable for supporting microbial life. Spirit ended communications in March 2010 as its energy declined after losing the use of two of its six wheels, which prevented it from being able to gain a sun-facing tilt for its fourth Martian winter.

NASA's Jet Propulsion Laboratory, a division of the California Institute of Technology in Pasadena, manages the Mars Exploration Rover Project for the NASA Science Mission Directorate, Washington. More information about Opportunity is online at: http://www.nasa.gov/rovers and http://marsrovers.jpl.nasa.gov . You can follow the project on Twitter at http://www.twitter.com/marsrovers and on Facebook at http://www.facebook.com/marsrovers .