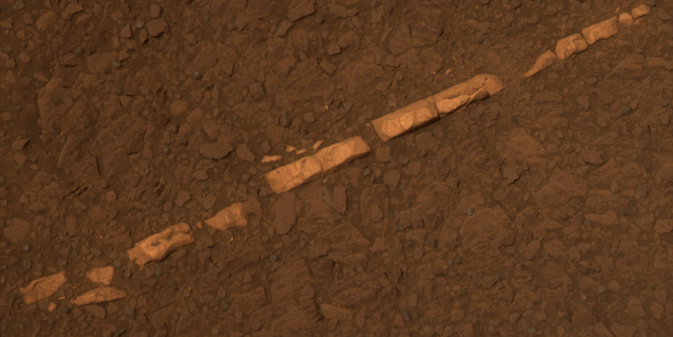 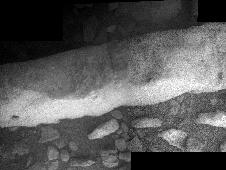 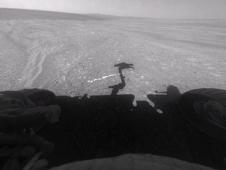 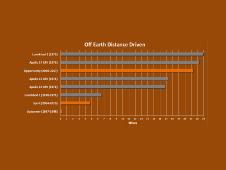 The total distance driven on Mars by NASA's Mars Exploration Rover, 21.35 miles by early December 2011, is approaching the record total for off-Earth driving, held by the robotic Lunokhod 2 rover operated on Earth's moon by the Soviet Union in 1973. Image credit: NASA/JPL-Caltech
› Full image and caption

PASADENA, Calif. -- NASA's Mars Exploration Rover Opportunity has found bright veins of a mineral, apparently gypsum, deposited by water. Analysis of the vein will help improve understanding of the history of wet environments on Mars.

"This tells a slam-dunk story that water flowed through underground fractures in the rock," said Steve Squyres of Cornell University, Ithaca, N.Y., principal investigator for Opportunity. "This stuff is a fairly pure chemical deposit that formed in place right where we see it. That can't be said for other gypsum seen on Mars or for other water-related minerals Opportunity has found. It's not uncommon on Earth, but on Mars, it's the kind of thing that makes geologists jump out of their chairs."

The latest findings by Opportunity were presented Wednesday at the American Geophysical Union's conference in San Francisco.

The vein examined most closely by Opportunity is about the width of a human thumb (0.4 to 0.8 inch, or 1 to 2 centimeters), 16 to 20 inches (40 to 50 centimeters) long, and protrudes slightly higher than the bedrock on either side of it. Observations by the durable rover reveal this vein and others like it within an apron surrounding a segment of the rim of Endeavour Crater. None like it were seen in the 20 miles (33 kilometers) of crater-pocked plains that Opportunity explored for 90 months before it reached Endeavour, nor in the higher ground of the rim.

Last month, researchers used the Microscopic Imager and Alpha Particle X-ray Spectrometer on the rover's arm and multiple filters of the Panoramic Camera on the rover's mast to examine the vein, which is informally named "Homestake." The spectrometer identified plentiful calcium and sulfur, in a ratio pointing to relatively pure calcium sulfate.

Calcium sulfate can exist in many forms, varying by how much water is bound into the minerals' crystalline structure. The multi-filter data from the camera suggest gypsum, a hydrated calcium sulfate. On Earth, gypsum is used for making drywall and plaster of Paris. Observations from orbit had detected gypsum on Mars previously. A dune field of windblown gypsum on far northern Mars resembles the glistening gypsum dunes in White Sands National Monument in New Mexico.

"It is a mystery where the gypsum sand on northern Mars comes from," said Opportunity science-team member Benton Clark of the Space Science Institute in Boulder, Colo. "At Homestake, we see the mineral right where it formed. It will be important to see if there are deposits like this in other areas of Mars."

The Homestake deposit, whether gypsum or another form of calcium sulfate, likely formed from water dissolving calcium out of volcanic rocks. The calcium combined with sulfur that was either leached from the rocks or introduced as volcanic gas, and it was deposited as calcium sulfate into an underground fracture that later became exposed at the surface.

Throughout Opportunity's long traverse across Mars' Meridiani plain, the rover has driven over bedrock composed of magnesium, iron and calcium sulfate minerals that also indicate a wet environment billions of years ago. The highly concentrated calcium sulfate at Homestake could have been produced in conditions more neutral than the harshly acidic conditions indicated by the other sulfate deposits observed by Opportunity.

"It could have formed in a different type of water environment, one more hospitable for a larger variety of living organisms," Clark said.

Homestake and similar-looking veins appear in a zone where the sulfate-rich sedimentary bedrock of the plains meets older, volcanic bedrock exposed at the rim of Endeavour. That location may offer a clue about their origin.

Opportunity and its rover twin, Spirit, completed their three-month prime missions on Mars in April 2004. Both rovers continued for years of extended missions and made important discoveries about wet environments on ancient Mars that may have been favorable for supporting microbial life. Spirit stopped communicating in 2010. Opportunity continues exploring, currently heading to a sun-facing slope on the northern end of the Endeavour rim fragment called "Cape York" to keep its solar panels at a favorable angle during the mission's fifth Martian winter.

"We want to understand why these veins are in the apron but not out on the plains," said the mission's deputy principal investigator, Ray Arvidson, of Washington University in St. Louis. "The answer may be that rising groundwater coming from the ancient crust moved through material adjacent to Cape York and deposited gypsum, because this material would be relatively insoluble compared with either magnesium or iron sulfates."

NASA launched the next-generation Mars rover, the car-sized Curiosity, on Nov. 26. It is slated for arrival at the planet's Gale Crater in August 2012. NASA's Jet Propulsion Laboratory, a division of the California Institute of Technology in Pasadena, manages the Mars Exploration Rover Project for the NASA Science Mission Directorate in Washington. For more information about the rovers, visit http://www.nasa.gov/rovers and http://marsrovers.jpl.nasa.gov . You can follow the project on Twitter at http://www.twitter.com/marsrovers and on Facebook at http://www.facebook.com/marsrovers