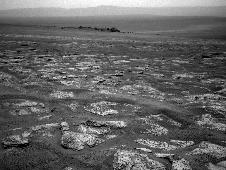 This image from the navigation camera on NASA's Mars Exploration Rover Opportunity shows the view ahead on the day before the rover reached the rim of Endeavour crater. Image credit: NASA/JPL-Caltech
› Full image and caption
› See video

While NASA's Mars Exploration Rover Opportunity was traveling from Victoria crater to Endeavour crater, between September 2008 and August 2011, the rover team took an end-of-drive image on each Martian day that included a drive. A new video compiles these 309 images, providing an historic record of the three-year trek that totaled about 13 miles (21 kilometers) across a Martian plain pocked with smaller craters.

The video featuring the end-of-drive images is now available online, at http://www.nasa.gov/multimedia/videogallery/index.html?media_id=114782241 . It shows the rim of Endeavour becoming visible on the horizon partway through the journey and growing larger as Opportunity neared that goal. The drive included detours, as Opportunity went around large expanses of treacherous terrain along the way.

The rover team also produced a sound track for the video, using each drive day's data from Opportunity's accelerometers. The low-frequency data has been sped up 1,000 times to yield audible frequencies.

Opportunity and its rover twin, Spirit, completed their three-month prime missions on Mars in April 2004. Both rovers continued for years of bonus, extended missions. Both have made important discoveries about wet environments on ancient Mars that may have been favorable for supporting microbial life. Spirit stopped communicating in 2010. Opportunity continues its work at Endeavour. NASA will launch the next-generation Mars rover, car-size Curiosity, this autumn, for arrival at Mars' Gale crater in August 2012.

JPL, a division of the California Institute of Technology in Pasadena, manages the Mars Exploration Rover Project for the NASA Science Mission Directorate, Washington. More information about the rovers is online at: http://www.nasa.gov/rovers and http://marsrovers.jpl.nasa.gov . You can also follow the mission on Facebook at http://www.facebook.com/marsrovers and on Twitter at http://www.twitter.com/marsrovers .