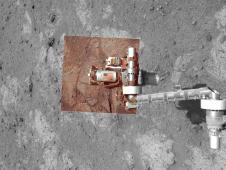 This view of an American flag on metal recovered from the site of the World Trade Center towers shortly after their destruction on Sept. 11, 2001, was taken on Mars on Sept. 11, 2011, the 10th anniversary of the attacks on the towers. Image credit: NASA/JPL-Caltech/Cornell University/Arizona State University
› Full image and caption

PASADENA, Calif. -- A view of a memorial to victims of the Sept. 11, 2001, attacks on the World Trade Center towers was taken on Mars yesterday, on the 10th anniversary of the attacks.

The memorial, made from aluminum recovered from the site of the twin towers in weeks following the attacks, serves as a cable guard on a tool on NASA's Mars Exploration Rover Opportunity and bears an image of the American flag.

The view combining exposures from two cameras on the rover is online at: http://www.nasa.gov/mission_pages/mer/multimedia/pia14750.html .

The memorial is on the rover's rock abrasion tool, which was being made in September 2001 by workers at Honeybee Robotics in lower Manhattan, less than a mile from the World Trade Center.

Opportunity's panoramic camera and navigation camera photographed the tool on Sept. 11, 2011, during the 2,713th Martian day of the rover's work on Mars. Opportunity completed its three-month prime mission on Mars in April 2004 and has worked for more than seven years since then in bonus extended missions.

NASA's Jet Propulsion Laboratory, a division of the California Institute of Technology in Pasadena, manages the Mars Exploration Rover Project for the NASA Science Mission Directorate, Washington. Additional information about Opportunity and its rover twin, Spirit, is online at http://marsrovers.jpl.nasa.gov and http://www.nasa.gov/rovers .