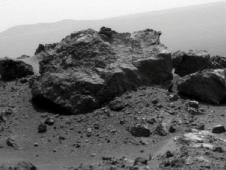 NASA's Mars Exploration Rover Opportunity looked across a small crater on the rim of a much larger crater to capture this raw image from its panoramic camera. Image credit: NASA/JPL-Caltech/Cornell/ASU
› Full image and caption
› 'Tisdale 2' Rock
› Soil on Endeavour rim
› View across Endeavour

NASA's Mars Exploration Rover Opportunity has captured new images of intriguing Martian terrain from a small crater near the rim of the large Endeavour crater. The rover arrived at the 13-mile-diameter (21-kilometer-diameter) Endeavour on Aug. 9, after a journey of almost three years.

Opportunity is now examining the ejected material from the small crater, named "Odyssey." The rover is approaching a large block of ejecta for investigation with tools on the rover's robotic arm.

Opportunity and Spirit completed their three-month prime missions on Mars in April 2004. Both rovers continued for years of bonus, extended missions. Both have made important discoveries about wet environments on ancient Mars that may have been favorable for supporting microbial life. Spirit ended communications in March 2010.

NASA's Jet Propulsion Laboratory, a division of the California Institute of Technology in Pasadena, manages the Mars Exploration Rover Project for the NASA Science Mission Directorate, Washington. More information about the rovers is online at: http://www.nasa.gov/rovers or http://marsrovers.jpl.nasa.gov .