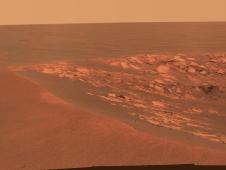 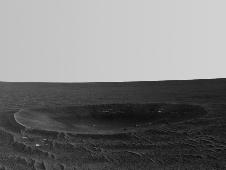 "Yankee Clipper" crater on Mars carries the name of the command and service module of NASA's 1969 Apollo 12 mission to the moon. Image credit: NASA/JPL-Caltech
› Full image and caption
› 3-D version


PASADENA, Calif. -- NASA's Mars Exploration Rover Opportunity has visited and photographed two craters informally named for the spacecraft that carried men to the moon 41 years ago this week.

Opportunity drove past "Yankee Clipper" crater on Nov. 4 and reached "Intrepid crater" on Nov. 9. For NASA's Apollo 12, the second mission to put humans onto the moon, the command and service module was called Yankee Clipper, piloted by Dick Gordon, and the lunar module was named Intrepid, piloted by Alan Bean and commanded by the late Pete Conrad. The Intrepid landed on the moon with Bean and Conrad on Nov. 19, 1969, while Yankee Clipper orbited overhead. Their landing came a mere four months after Apollo 11's first lunar landing.

This week, Bean wrote to the Mars Exploration Rover team: "I just talked with Dick Gordon about the wonderful honor you have bestowed upon our Apollo 12 spacecraft. Forty-one years ago today, we were approaching the moon in Yankee Clipper with Intrepid in tow. We were excited to have the opportunity to perform some important exploration of a place in the universe other than planet Earth where humans had not gone before. We were anxious to give it our best effort. You and your team have that same opportunity. Give it your best effort."

Rover science team member James Rice, of NASA's Goddard Space Flight Center, Greenbelt, Md., suggested using the Apollo 12 names. He was applying the rover team's convention of using names of historic ships of exploration for the informal names of craters that Opportunity sees in the Meridian Planum region of Mars.

"The Apollo missions were so inspiring when I was young, I remember all the dates. When we were approaching these craters, I realized we were getting close to the Nov. 19 anniversary for Apollo 12," Rice said. He sent Bean and Gordon photographs that Opportunity took of the two craters.

After a two-day stop to photograph the rocks exposed at Intrepid, Opportunity continued on a long-term trek toward Endeavour crater, a highly eroded crater about 1,000 times wider than Intrepid. Endeavour's name comes from the ship of James Cook's first Pacific voyage.

During a drive of 116.9 meters (383.5 feet) on Nov. 14, Opportunity's "odometer" passed 25 kilometers (15.53 miles). That is more than 40 times the driving-distance goal set for Opportunity to accomplish during its original three-month prime mission in 2004.

Mars Exploration Project Manager John Callas, of NASA's Jet Propulsion Laboratory, Pasadena, Calif., said, "Importantly, it's not how far the rovers have gone but how much exploration and science discovery they have accomplished on behalf of all humankind."

At the beginning of Opportunity's mission, the rover landed inside "Eagle crater," about the same size as Intrepid crater. The team's name for that landing-site crater paid tribute to the lunar module of Apollo 11, the first human landing on the moon. Opportunity spent two months inside Eagle crater, where it found multiple lines of evidence for a wet environment in the area's ancient past.

The rover team is checking regularly for Opportunity's twin, Spirit, in case the increasing daily solar energy available at Spirit's location enables the rover to reawaken and resume communication. No signal from Spirit has been received since March 22. Spring began last week in the southern hemisphere of Mars.

JPL, a division of the California Institute of Technology in Pasadena, manages the Mars Exploration Rovers for the NASA Science Mission Directorate, Washington. For more information about the rovers, visit: http://www.nasa.gov/rovers .