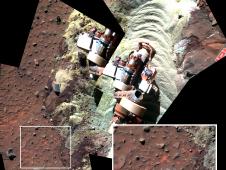 This mosaic of images shows the soil in front of NASA's Mars Exploration Rover Spirit after a series of short backward drives during attempts to extricate the rover from a sand trap in January and early February 2010. Image Credit: NASA/JPL-Caltech/Cornell University
› Full image and caption
› Labeled version

Stratified soil layers with different compositions close to the surface led the rover science team to propose that thin films of water may have entered the ground from frost or snow. The seepage could have happened during cyclical climate changes in periods when Mars tilted farther on its axis. The water may have moved down into the sand, carrying soluble minerals deeper than less soluble ones. Spin-axis tilt varies over timescales of hundreds of thousands of years.

The relatively insoluble minerals near the surface include what is thought to be hematite, silica and gypsum. Ferric sulfates, which are more soluble, appear to have been dissolved and carried down by water. None of these minerals are exposed at the surface, which is covered by wind-blown sand and dust.

"The lack of exposures at the surface indicates the preferential dissolution of ferric sulfates must be a relatively recent and ongoing process since wind has been systematically stripping soil and altering landscapes in the region Spirit has been examining," said Ray Arvidson of Washington University in St. Louis, deputy principal investigator for the twin rovers Spirit and Opportunity.

Analysis of these findings appears in a report in the Journal of Geophysical Research published by Arvidson and 36 co-authors about Spirit's operations from late 2007 until just before the rover stopped communicating in March.

The twin Mars rovers finished their three-month prime missions in April 2004, then kept exploring in bonus missions. One of Spirit's six wheels quit working in 2006.

In April 2009, Spirit's left wheels broke through a crust at a site called "Troy" and churned into soft sand. A second wheel stopped working seven months later. Spirit could not obtain a position slanting its solar panels toward the sun for the winter, as it had for previous winters. Engineers anticipated it would enter a low-power, silent hibernation mode, and the rover stopped communicating March 22. Spring begins next month at Spirit's site, and NASA is using the Deep Space Network and the Mars Odyssey orbiter to listen if the rover reawakens.

Researchers took advantage of Spirit's months at Troy last year to examine in great detail soil layers the wheels had exposed, and also neighboring surfaces. Spirit made 13 inches of progress in its last 10 backward drives before energy levels fell too low for further driving in February. Those drives exposed a new area of soil for possible examination if Spirit does awaken and its robotic arm is still usable.

"With insufficient solar energy during the winter, Spirit goes into a deep-sleep hibernation mode where all rover systems are turned off, including the radio and survival heaters," said John Callas, project manager for Spirit and Opportunity at NASA's Jet Propulsion Laboratory in Pasadena, Calif. "All available solar array energy goes into charging the batteries and keeping the mission clock running."

The rover is expected to have experienced temperatures colder than it has ever before, and it may not survive. If Spirit does get back to work, the top priority is a multi-month study that can be done without driving the rover. The study would measure the rotation of Mars through the Doppler signature of the stationary rover's radio signal with enough precision to gain new information about the planet's core. The rover Opportunity has been making steady progress toward a large crater, Endeavour, which is now approximately 8 kilometers (5 miles) away.

Spirit, Opportunity, and other NASA Mars missions have found evidence of wet Martian environments billions of years ago that were possibly favorable for life. The Phoenix Mars Lander in 2008 and observations by orbiters since 2002 have identified buried layers of water ice at high and middle latitudes and frozen water in polar ice caps. These newest Spirit findings contribute to an accumulating set of clues that Mars may still have small amounts of liquid water at some periods during ongoing climate cycles.

JPL, a division of the California Institute of Technology in Pasadena, manages the rovers for the agency's Science Mission Directorate in Washington.

More information about the rovers is online at: http://www.nasa.gov/rovers .