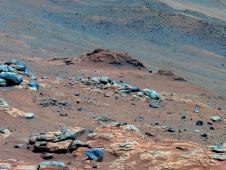 PASADENA, Calif. -- Rocks examined by NASA's Spirit Mars Rover hold evidence of a wet, non-acidic ancient environment that may have been favorable for life. Confirming this mineral clue took four years of analysis by several scientists.

An outcrop that Spirit examined in late 2005 revealed high concentrations of carbonate, which originates in wet, near-neutral conditions, but dissolves in acid. The ancient water indicated by this find was not acidic.

NASA's rovers have found other evidence of formerly wet Martian environments. However the data for those environments indicate conditions that may have been acidic. In other cases, the conditions were definitely acidic, and therefore less favorable as habitats for life.

"This is one of the most significant findings by the rovers," said Steve Squyres of Cornell University in Ithaca, N.Y. Squyres is principal investigator for the Mars twin rovers, Spirit and Opportunity, and a co-author of the new report. "A substantial carbonate deposit in a Mars outcrop tells us that conditions that could have been quite favorable for life were present at one time in that place. "

Spirit inspected rock outcrops, including one scientists called Comanche, along the rover's route from the top of Husband Hill to the vicinity of the Home Plate plateau which Spirit has studied since 2006. Magnesium iron carbonate makes up about one-fourth of the measured volume in Comanche. That is a tenfold higher concentration than any previously identified for carbonate in a Martian rock.

"We used detective work combining results from three spectrometers to lock this down," said Dick Morris, lead author of the report and a member of a rover science team at NASA's Johnson Space Center in Houston."The instruments gave us multiple, interlocking ways of confirming the magnesium iron carbonate, with a good handle on how much there is."

Massive carbonate deposits on Mars have been sought for years without much success. Numerous channels apparently carved by flows of liquid water on ancient Mars suggest the planet was formerly warmer, thanks to greenhouse warming from a thicker atmosphere than exists now. The ancient, dense Martian atmosphere was probably rich in carbon dioxide, because that gas makes up nearly all the modern, very thin atmosphere.

It is important to determine where most of the carbon dioxide went. Some theorize it departed to space. Others hypothesize that it left the atmosphere by the mixing of carbon dioxide with water under conditions that led to forming carbonate minerals. That possibility, plus finding small amounts of carbonate in meteorites that originated from Mars, led to expectations in the 1990s that carbonate would be abundant on Mars. However, mineral-mapping spectrometers on orbiters since then have found evidence of localized carbonate deposits in only one area, plus small amounts distributed globally in Martian dust. 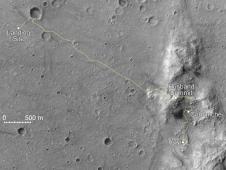 Morris suspected iron-bearing carbonate at Comanche years ago from inspection of the rock with Spirit's Moessbauer Spectrometer, which provides information about iron-containing minerals. Confirming evidence from other instruments emerged slowly. The instrument with the best capability for detecting carbonates, the Miniature Thermal Emission Spectrometer, had its mirror contaminated with dust earlier in 2005, during a wind event that also cleaned Spirit's solar panels.

"It was like looking through dirty glasses," said Steve Ruff of Arizona State University in Tempe, Ariz., another co-author of the report. "We could tell there was something very different about Comanche compared with other outcrops we had seen, but we couldn't tell what it was until we developed a correction method to account for the dust on the mirror."

The rovers landed on Mars in January 2004 for missions originally planned to last three months. Spirit has been out of communication since March 22 and is in a low-power hibernation status during Martian winter. Opportunity is making steady progress toward a large crater, Endeavour, which is about seven miles away.