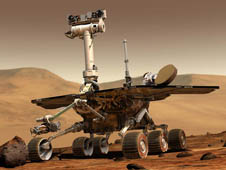 In this mode, the rover's clock keeps running, but communications and other activities are suspended in order to put all available energy into heating and battery recharging. When the battery charge is adequate, the rover attempts to wake up and communicate on a schedule it knows.

"We may not hear from Spirit again for weeks or months, but we will be listening at every opportunity, and our expectation is that Spirit will resume communications when the batteries are sufficiently charged," said John Callas of NASA's Jet Propulsion Laboratory, Pasadena, Calif., who is project manager for Spirit and its twin rover, Opportunity.

Spirit's power supply is low because daily sunshine for dusty solar panels is declining with the approach of the winter solstice, in mid-May, in Mars' southern hemisphere.  In the three previous Martian winters that Spirit has survived since landing in January 2004, the rover was tilted northward to put its solar panels at a favorable angle toward the sun. That preparation was not possible this winter because of impaired mobility. Spirit's wheels are dug into soft sand, and the rover lost the use of a second wheel four months ago. It had previously lost use of one of its six wheels four years ago.

Spirit's original mission was planned to last for three months. The rover has worked extended missions since April 2004.  Opportunity is currently on a long-term trek toward a large crater named Endeavour.

Spirit had been communicating on a once-per-week schedule in recent weeks. During the designated time for the rover to communicate with NASA's Mars Odyssey orbiter passing overhead on March 30, Odyssey heard nothing from the rover.

"We are checking other less-likely possibilities for the missed communication, but this probably means that Spirit tripped a low-power fault sometime between the last downlink on March 22 and yesterday," Callas said. "The recent downlinks had indicated that the battery state of charge was decreasing, getting close to the level that would put Spirit into this hibernation."

In coming weeks, Spirit's core electronics will become colder than any temperature they have ever experienced on Mars.  Thermal projections indicate the temperature probably will not drop lower than the electronics were designed and tested to tolerate, but the age of the rover adds to the uncertainty of survival.

"The temperature limit was for a new rover. We now have an older rover with thousands of thermal cycles on Mars, so the colder temperatures will be a further stress," Callas said.

JPL, a division of the California Institute of Technology in Pasadena, manages the Mars Exploration Rover Project for NASA's Science Mission Directorate, Washington.  For more information about the Mars rovers, visit http://www.nasa.gov/rovers .