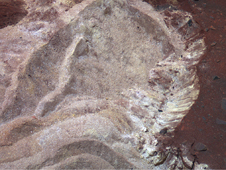 In April, Spirit entered an area composed of three or more layers of soil with differing pastel hues hiding beneath a darker sand blanket. Scientists dubbed the site "Troy." Spirit's rotating wheels dug themselves more than hub deep at the site. The rover team has spent weeks studying Spirit's situation and preparing a simulation of this Martian driving dilemma to test escape maneuvers using an engineering test rover at NASA's Jet Propulsion Laboratory in Pasadena, Calif.

A rock seen beneath Spirit in images from the camera on the end of the rover's arm may be touching Spirit's belly. Scientists believe it appears to be a loose rock not bearing the rover's weight. While Spirit awaits extraction instructions, the rover is keeping busy examining Troy, which is next to a low plateau called Home Plate, approximately 3.2 kilometers (2 miles) southeast of where Spirit landed in January 2004.

"By serendipity, Troy is one of the most interesting places Spirit has been," said Ray Arvidson of Washington University in St. Louis. Arvidson is deputy principal investigator for the science payloads on Spirit and its twin rover, Opportunity. "We are able here to study each layer, each different color of the interesting soils exposed by the wheels."

One of the rover's wheels tore into the site, exposing colored sandy materials and a miniature cliff of cemented sands. Some disturbed material cascaded down, evidence of the looseness that will be a challenge for getting Spirit out. But at the edge of the disturbed patch, the soil is cohesive enough to hold its shape as a steep cross-section.

Spirit has been using tools on its robotic arm to examine tan, yellow, white and dark-red sandy soil at Troy. Stretched-color images from the panoramic camera show the tints best.

"The layers have basaltic sand, sulfate-rich sand and areas with the addition of silica-rich materials, possibly sorted by wind and cemented by the action of thin films of water. We're still at a stage of multiple working hypotheses," said Arvidson. "This may be evidence of much more recent processes than the formation of Home Plate...or is Home Plate being slowly stripped back by wind, and we happened to stir up a deposit from billions of years ago before the wind got to it?"

Team members from NASA's Johnson Space Center in Houston feel initial readings suggest that iron is mostly present in an oxidized form as ferric sulfate and that some of the differences in tints at Troy observed by the panoramic camera may come from differences in the hydration states of iron sulfates.

While extraction plans for the rover are developed and tested during the coming weeks, the team plans to have Spirit further analyze the soil from different depths. This research benefits from having time and power. In April and May, winds blew away most of the dust that had accumulated on Spirit's solar panels.

"The exceptional amount of power available from cleaning of Spirit's solar arrays by the wind enables full use of all of the rover's science instruments," said Richard Moddis of the Johnson team. "If your rover is going to get bogged down, it's nice to have it be at a location so scientifically interesting."

The rover team has developed a soil mix for testing purposes that has physical properties similar to those of the soil under Spirit at Troy. This soil recipe combines diatomaceous earth, powdered clay and play sand. A crew is shaping a few tons of that mix this week into contours matching Troy's. The test rover will be commanded through various combinations of maneuvers during the next few weeks to validate the safest way to proceed on Mars.

Spirit's right-front wheel has been immobile for more than three years, magnifying the challenge. While acknowledging a possibility that Spirit might not be able to leave Troy, the rover team remains optimistic. Diagnostic tests on Spirit in early June provided encouragement that the left-middle wheel remains useable despite an earlier stall.

"With the improved power situation, we have the time to explore all the possibilities to get Spirit out," said JPL's John Callas, project manager for Spirit and Opportunity. "We are optimistic. The last time Spirit spun its wheels, it was still making progress. The ground testing will help us avoid doing things that could make Spirit's situation worse."