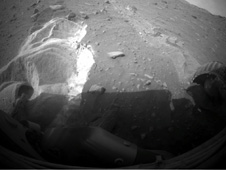 Wheel slippage during attempts to extricate NASA's Mars Rover Spirit from a patch of soft ground during the preceding two weeks had partially buried the wheels by the 1,899th Martian day, or sol, of the Spirit's mission on Mars (May 6, 2009). Image credit: NASA/JPL-Caltech
› Full image and caption Mars Exploration Rover Mission Status Report

PASADENA, Calif. -- The five wheels that still rotate on NASA's Mars Exploration Rover Spirit have been slipping severely in soft soil during recent attempts to drive, sinking the wheels about halfway into the ground.

The rover team of engineers and scientists has suspended driving Spirit temporarily while studying the ground around the rover and planning simulation tests of driving options with a test rover at NASA's Jet Propulsion Laboratory, Pasadena, Calif.

"Spirit is in a very difficult situation," JPL's John Callas, project manager for Spirit and its twin rover, Opportunity, said Monday. "We are proceeding methodically and cautiously. It may be weeks before we try moving Spirit again. Meanwhile, we are using Spirit's scientific instruments to learn more about the physical properties of the soil that is giving us trouble."

Both Spirit and Opportunity have operated more than five years longer than their originally planned missions of three months on Mars and have driven much farther than designed. The rover team has so far developed ways to cope with various symptoms of aging on both rovers.

Spirit has been driving counterclockwise from north to south around a low plateau called "Home Plate" for two months. The rover progressed 122 meters (400 feet) on that route before reaching its current position.

In the past week, the digging-in of Spirit's wheels has raised concerns that the rover's belly pan could now be low enough to contact rocks underneath the chassis, which would make getting out of the situation more difficult. The right-front wheel on Spirit stopped working three years ago. Driving with just five powered wheels while dragging or pushing an immobile wheel adds to the challenge of the situation.

Favorably, three times in the past month, wind has removed some of the dust accumulated on Spirit's solar panels. This increases the rover's capability for generating electricity. "The improved power situation buys us time," Callas said. "We will use that time to plan the next steps carefully. We know that dust storms could return at any time, although the skies are currently clear."

Behavioral problems that Spirit exhibited in early April -- episodes of amnesia, computer resets and failure to wake for communications sessions -- have not recurred in the past three weeks, though investigations have yet to diagnose the root causes.