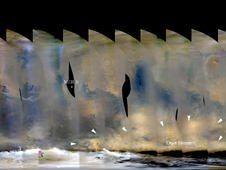 This nearly global mosaic of observations made by the Mars Color Imager on NASA's Mars Reconnaissance Orbiter on April 2, 2009, shows billowing clouds of dust being lifted into the atmosphere by a storm near the edge of the seasonal polar cap of southern Mars. Image credit: NASA/JPL-Caltech/M SSS
› Full image and caption PASADENA, Calif. -- Heading into a period of the Martian year prone to major dust storms, the team operating NASA's twin Mars rovers is taking advantage of eye-in-the-sky weather reports.

On April 21, Mars will be at the closest point to the sun in the planet's 23-month, elliptical orbit. One month later, the planet's equinox will mark the start of summer in Mars' southern hemisphere. This atmospheric-warming combination makes the coming weeks the most likely time of the Martian year for dust storms severe enough to minimize activities of the rovers.

"Since the rovers are solar powered, the dust in the atmosphere is extremely important to us," said Bill Nelson of NASA's Jet Propulsion Laboratory, Pasadena, Calif., chief of the engineering team for Spirit and Opportunity.

Unexplained computer reboots by Spirit in the past week are not related to dust's effects on the rover's power supply, but the dust-storm season remains a concern. Spirit received commands Tuesday to transmit more engineering data in coming days to aid in diagnosis of the reboots.

After months of relatively clear air, increased haze in March reduced Spirit's daily energy supply by about 20 percent and Opportunity's by about 30 percent. Widespread haze resulted from a regional storm that made skies far south of the rovers very dusty. Conditions at the rovers' sites remained much milder than the worst they have endured. In July 2007, nearly one Martian year ago, airborne dust blocked more than 99 percent of the direct sunlight at each rover's site.

The rovers point cameras toward the sun to check the clarity of the atmosphere virtually every day. These measurements let the planning team estimate how much energy the rovers will have available on the following day. Observations of changes in the Martian atmosphere by NASA's Mars Reconnaissance Orbiter, which reached Mars in 2006, and NASA's Mars Odyssey, which reached Mars in 2001, are available to supplement the rover's own skywatch.

The Mars Color Imager camera on Mars Reconnaissance Orbiter sees the entire planet every day at resolution comparable to weather satellites around Earth.

"We can identify where dust is rising into the atmosphere and where it is moving from day to day," said Michael Malin of Malin Space Science Systems, San Diego, principal investigator for Mars Color Imager. "Our historical baseline of observing Martian weather, including data from the Mars Global Surveyor mission from 1998 to 2007, helps us know what to expect. Weather on Mars is more repetitive from year to year than weather on Earth. Global dust events do not occur every Mars year, but if they do occur, they are at this time of year."

When orbital observations indicate a dust-raising storm is approaching a rover, the rover team can take steps to conserve energy. For example, the team can reduce the length of time the rover will be active or can shorten or delete some communication events.

In recent weeks, frequent weather reports from Bruce Cantor of Malin's Mars Color Imager team let the rover team know that the March increase in haziness was not the front edge of a bad storm. "Bruce's weather reports have let us be more aggressive about using the rovers," said Mark Lemmon, a rover-team atmospheric scientist at Texas A&M University, College Station. "There have been fewer false alarms. Earlier in the mission, we backed off a lot on operations whenever we saw a small increase in dust. Now, we have enough information to know whether there's really a significant dust storm headed our way."

At other times, the weather reports prompt quick precautionary actions. On Saturday, Nov. 8, 2008, the rover team received word from Cantor of a dust storm nearing Spirit. The team deleted a communication session that Sunday and sent a minimal-activity set of commands that Monday. Without those responses, Spirit would likely have depleted its batteries to a dangerous level.

Winds that can lift dust into the air can also blow dust off the rovers' solar panels. The five-year-old rover missions, originally planned to last for three months, would have ended long ago if beneficial winds didn't occasionally remove some of the dust that accumulates on the panels. A cleaning event in early April aided Opportunity's power output, and Spirit got two minor cleanings in February, but the last major cleaning for Spirit was nearly a full Martian year ago.

Nelson said, "We're all hoping we'll get another good cleaning."