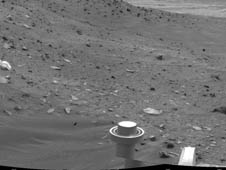 The team operating NASA's Mars Exploration Rover Spirit is examining data received from Spirit in recent days to diagnose why the rover apparently rebooted its computer at least twice over the April 11-12 weekend.

"While we don't have an explanation yet, we do know that Spirit's batteries are charged, the solar arrays are producing energy and temperatures are well within allowable ranges. We have time to respond carefully and investigate this thoroughly," said John Callas of NASA's Jet Propulsion Laboratory, Pasadena, Calif., project manager for Spirit and twin-rover Opportunity. "The rover is in a stable operations state called automode and taking care of itself. It could stay in this stable mode for some time if necessary while we diagnose the problem."

Spirit communicated with controllers Friday, Saturday and Sunday, but some of the communication sessions were irregular. One of the computer resets apparently coincided in timing with operation of the rover's high-gain dish antenna.

The rover team has the advantage of multiple communication options. Spirit can communicate directly with Earth via either the pointable high-gain antenna or, at a slower data rate, through a low-gain antenna that does not move. Additionally, communications can be relayed by Mars orbiters, using the UHF (ultra-high frequency) transceiver, a separate radio system on the rover.

"To avoid potential problems using the pointable antenna, we might consider for the time being just communicating by UHF relay or using the low-gain antenna," Callas said.

Spirit finished its three-month prime mission on Mars five years ago and has kept operating through multiple mission extensions.

The rover's onboard software has been updated several times to add new capabilities for the mission, most recently last month. The team is investigating whether the unexpected behavior in recent days could be related to the new software, but the same software is operating on Opportunity without incident.

"We are aware of the reality that we have an aging rover, and there may be age-related effects here," Callas said.

In the past five weeks, Spirit has made 119 meters (390 feet) of progress going counterclockwise around a low plateau called "Home Plate" to get from the place where it spent the past Martian winter on the northern edge of Home Plate toward destinations of scientific interest south of the plateau. On March 10, after several attempts to get past obstacles at the northeastern corner of Home Plate, the rover team decided to switch from a clockwise route to the counterclockwise one. Subsequent events have included Spirit's longest one-day drive since the rover lost use of one of its wheels three years ago, plus detailed inspection of light-toned soil exposed by the dragging of the inoperable wheel.

Halfway around Mars, meanwhile, Opportunity has continued progress on a long-term trek toward Endeavour Crater, a bowl 22 kilometers (14 miles) in diameter and still about 12 kilometers (7 miles) away. Last week, a beneficial wind removed some dust from Opportunity's solar array, resulting in an increase by about 40 percent in the amount of electrical output from the rover's solar panels.