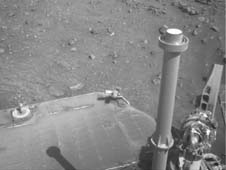 A small but important uptick in electrical output from the solar panels on NASA's Mars Exploration Rover Spirit this month indicates a beneficial Martian wind has blown away some of the dust that has accumulated on the panels.

The cleaning boosts Spirit's daily energy supply by about 30 watt-hours, to about 240 watt-hours from 210 watt-hours. The rover uses about 180 watt-hours per day for basic survival and communications, so this increase roughly doubles the amount of discretionary power for activities such as driving and using instruments. Thirty watt-hours is the amount of energy used to light a 30-watt bulb for one hour.

"We will be able to use this energy to do significantly more driving," said Colette Lohr, a rover mission manager at NASA's Jet Propulsion Laboratory, Pasadena, Calif. "Our drives have been averaging about 50 minutes, and energy has usually been the limiting factor. We may be able to increase that to drives of an hour and a half."

Spirit has driven about 9 meters (about 30 feet) since getting around a rock that temporarily blocked its progress on Jan. 31. The team's goal in coming weeks is to navigate the rover over or around a low plateau called "Home Plate" to get to an area targeted for scientific studies on the other side of Home Plate.

JPL's Jennifer Herman, a rover team engineer, found the first evidence for the new cleaning event in engineering data from the Martian day 1,812 of Spirit's mission on the Red Planet (Feb. 6, 2009) and confirmed it from the following two days' data. Before the event, dust buildup on the solar array had reached the point where only 25 percent of sunlight hitting the array was getting past the dust to be used by the photovoltaic cells. Afterwards, that increased to 28 percent.

"It may not sound like a lot, but it is an important increase," Herman said.

The last prior cleaning event that was as beneficial as this one was in June 2007. Winds cleaned off more of the dust that time, but a dust storm in subsequent weeks undid much of the benefit.

Spirit and Opportunity have been operating on Mars for more than five years in exploration missions originally planned to last for three months. JPL, a division of the California Institute of Technology in Pasadena, manages the Mars Exploration Rover project for NASA's Science Mission Directorate, Washington. Media contact: Guy Webster 818-354-6278
Jet Propulsion Laboratory, Pasadena, Calif.
Guy.Webster@jpl.nasa.gov
2009-021
› Back To Top