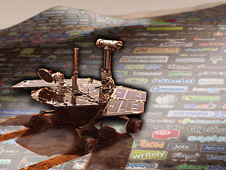 A montage showing an artist concept of the Mars Exploration Rovers along with social-networking sites. 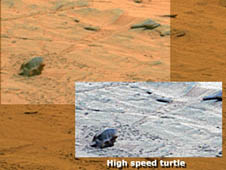 Doug Ellison's Web site has cleared up some whacky ideas about the Martian terrain. Above, he showed that what some conjectured was a turtle on Mars was really just a rock. Image credit: NASA/Cornell/JPL/Hartwell
Full view (1.9Mb) After five groundbreaking years exploring the Red Planet, the communications engineers at NASA's Jet Propulsion Laboratory pretty much know what they are getting when another downlink from Spirit or Opportunity arrives. They know that with a typical transmission comes about 10 megabits of engineering data, another 4 megabits of science data, and around 26 megabits of images. They also realize that after the information is amassed and analyzed by the rovers' science teams that the most unique, scientifically exciting of that compiled data will be released via peer-reviewed papers, articles, science briefings and press releases.

To date, literally thousands of rover images have been analyzed and discussed in detail. But the rovers have sent back about a quarter-million images. NASA decided this incongruity could be best addressed by making every single Mars rover image available to all who were interested -- and had Internet access.

Access to all that imagery brought the thrill of exploration to people around the world in a way never envisioned before the rovers began to roam the Red Planet. Now, the Mars Exploration Rovers have new life on the likes of "Second Life," "YouTube," online forums like "Unmannedspaceflight.com," and the social networking site "Facebook."

Like the majority of college students today, Keri Bean knows the ins and outs of Facebook. But the Texas A&M student did her Earth-based socializing peers one planet better when she opened a page for the Mars Rovers. "If I had to chose, I would say I like Spirit better," said the 20 year-old meteorology major from College Station, Texas. "She's had to work for everything. Opportunity gets a major discovery handed to her by landing nearly on top of it, but Spirit's had to work hard for everything she gets."

Bean started her Mars Rovers Facebook page to keep a few of her friends in the loop on what's happening up there on the Red Planet. She populated it with rover information and updates when she could find time. To her surprise, the rovers' friends list began to grow well beyond her goal of "a few friends." Then one day, she got a new friend that changed everything.

"Steve Squyres, the scientist in charge of both of the rovers, messaged me and said he liked my site," said Bean. "I knew then I had to get serious."

Bean and the Mars Rovers now have almost 1,700 online friends from as far away as Norway and New Zealand. Her (or their, depending how you look at it), page includes links to interesting articles about the rovers, images, sometimes a heads-up about upcoming documentaries and even some first-person dialogue between Mars' roving twosome.

"I do not have a lot of time this semester, but I try to check it once a day," said Bean. "It is all about reaching out to people who would normally not pay attention."

If Bean's Facebook page is for those with short Martian attention spans, Doug Ellison of the United Kingdom has put together a Web site for those with an insatiable appetite. Ellison has been interested in the Red Planet ever since NASA/JPL's first scrappy Mars rover, Pathfinder, roved the Martian surface back in 1997.

"Mars grabbed me in an unhealthy way," quipped Ellison, the United Kingdom-based Web czar of unmannedspaceflight.com. "Just on the fringe of acceptable."

In those days, Ellison was reading everything he could on the journey of Pathfinder. Then, in February 2004, while Mars rovers Spirit and Opportunity were still under factory warranty, and after his day job, Ellison used imaging software to "stitch" his first Mars panorama from a collection of raw images from the JPL Web site: (http://marsrovers.jpl.nasa.gov/gallery/all/).

Like Bean, Ellison had "no ambition or expectation" other than impressing himself and a few friends. But then a few more friends took an interest in his nascent Web site, and then a few more. Ellison's site – unmannedspaceflight.com -- was slowly being colonized with people with a serious jonesing for all things deep in deep space exploration.

"Our membership includes a care worker for the elderly here in the U.K. to a teacher in North Wales to a government employee in California," said Ellison. "In London, I recently met for the first time someone I had known through the Web site for four years. There were no "getting to know you" pleasantries. Straight off the bat it was right into a detailed, in-depth, insightful discussion about something ridiculously space-geeky."

Online discussions of spacecraft and mission science are only a small part of unmannedspaceflight.com's allure to the truly space geeky. The majority of the site, and its appeal, is dedicated to those stark and beautiful and sometimes puzzling images coming down from Spirit and Opportunity each and every day.

"Our members share results from stitching together rover images and working with those images," said Ellison. "Say Opportunity does a long drive. We download those pictures from the rover Web site. Somebody will make a mosaic from the imagery taken at the end of the drive. Somebody else will keep the route map up to date to show where Opportunity has been. Somebody else will then stitch together the next mosaic and have the full mosaic all together and then keep track of what the following day's activities are going to be."

All this pro-bono, unofficial fine-tuning of rover imagery by the members of the unmannedspaceflight.com forum has been recognized by some very official members of the aerospace and science media. Their work has made the cover of Aviation Week and Space Technology and Spaceflight and even been featured in NASA's own "Astronomy Picture of the Day" Web site: http://antwrp.gsfc.nasa.gov/apod/ .

As proud as Ellison is of his site's contributions to promoting the rovers and their stories, he is just as proud about how they can band together to police some of the more inimitable Mars storylines. With over 1,700 forum contributors surfing the internet, Mars stories that seem a little -- or a lot -- out of whack, are quickly identified. Like the one where numerous major media outlets began discussing the possibility of a Martian Sasquatch making an unscheduled appearance in a Spirit image.

"We took the story and quickly ripped it apart just by using the facts," said Ellison. "Some members worked out how far the "Sasquatch" was from the rover when the image was taken and calculated it was about the size of a packet of cigarettes. One of our posters did a brilliant job of taking the mosaic that the image came from and demonstrating how so many of the rocks in it could appear to look like something else."

"Like any travel adventure, a big part of the fun is sharing the experience with family and friends back home," said John Callas, Mars Exploration Rover project manager at JPL. "For five years now, it has been very rewarding to see the fascination -- and the love -- for the rovers that runs deep and knows no international boundaries. And as many ways as we can find to share the experience of exploring Mars, we now know that many out in the general public will find even more ways to enrich the whole experience for everyone."

The story could end here, but this is about how those outside of NASA have managed to place Mars within their own sphere of influence. So in conclusion, the words of someone who took Mars and ran with it.

"People like me get to see a little bit of Mars that no one has ever seen before," said Ellison. "The downlink of the imagery from the rovers is an entirely automated process. So, it might be 2 a.m. in Pasadena (home of JPL) when images come down but it is lunchtime here. I can see the images before the scientists do. To be able to ride along every single day on that adventure, sometimes you have to kind of shake your head in disbelief that you are seeing something that nobody has ever seen before."