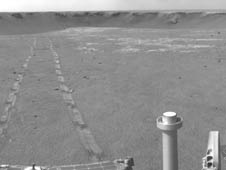 Since leaving "Victoria Crater," Opportunity has picked up the pace of driving. In the 90 sols (Martian days) since exiting the crater, Opportunity has driven more than 1,800 meters (1.1 miles), three times the distance that was required for the original prime mission. Image credit: NASA/JPL-Caltech
Larger view
Related podcast
Related audio clips
PASADENA, Calif. -- Public events during the next two weeks will share the adventures of the still-active NASA Mars rovers Spirit and Opportunity, which landed five years ago this month on missions originally scheduled to last three months.

On Friday, Jan. 23, through Sunday, Jan. 25, rover team members will give a series of talks at Griffith Observatory in Los Angeles. The observatory will also display a full-size Mars rover model, with team members available to answer visitors' questions.

Since landing on opposite sides of Mars during January of 2004, Spirit and Opportunity have made important discoveries about historically wet and violent environments on ancient Mars. They also have returned a quarter-million images, driven more than 21 kilometers (13 miles), climbed a mountain, descended into craters, struggled with sand traps and aging hardware, survived dust storms, and relayed more than 36 gigabytes of data via NASA's Mars Odyssey orbiter. Both rovers remain operational for new exploration campaigns the team has planned.

The public presentations on Jan. 15 and 16, "Spirit and Opportunity: The Corps of Discovery for Mars Rolls On," are part of the monthly von Kármán Lecture Series by NASA's Jet Propulsion Laboratory, Pasadena, Calif. Steve Squyres of Cornell University, Ithaca, N.Y., principal investigator for the science payloads on the rovers, will deliver the Jan. 15 talk in Beckman Auditorium on the campus of the California Institute of Technology, Pasadena, on Michigan Avenue one block south of Del Mar Avenue. JPL's John Callas, project manager for the rovers, will deliver the Jan. 16 talk in Pasadena City College's Vosloh Forum, 1570 E. Colorado Ave.

Squyres and Callas will begin their presentations at 7 p.m. Admission is free, on a first-come, first-seated basis. For more information about the lectures and the webcast of the Jan. 15 event, see http://www.jpl.nasa.gov/events/lectures.cfm?year=2009&month=1 .

At Griffith Observatory in Los Angeles, the full-size rover model will be on display in the Depths of Space gallery Jan. 23 through Jan. 25, accompanied by rover team members from JPL. Talks about topics such as how the team drives the rovers and what the rovers have revealed about Mars will be presented in the observatory's Leonard Nimoy Event Horizon Theater. These talks, by JPL rover-team members Al Herrera, Scott Lever, Scott Maxwell, John Callas, Bruce Banerdt and Ashley Stroupe, are scheduled for the following times: 7 p.m. on Jan. 23; 1:30 p.m., 4 p.m. and 7 p.m. on Jan. 24; and 1:30 p.m. and 4 p.m. on Jan. 25.