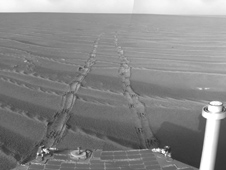 This mosaic of frames from the navigation camera on NASA's Mars Exploration Rover Opportunity gives a view to the northeast from the rover's position on its 1,687th Martian day. Image credit: NASA/JPL-Caltech
Full image and caption

PASADENA, Calif. -- NASA rovers Spirit and Opportunity may still have big achievements ahead as they approach the fifth anniversaries of their memorable landings on Mars.

Of the hundreds of engineers and scientists who cheered at NASA's Jet Propulsion Laboratory in Pasadena, Calif., on Jan. 3, 2004, when Spirit landed safely, and 21 days later when Opportunity followed suit, none predicted the team would still be operating both rovers in 2009.

"The American taxpayer was told three months for each rover was the prime mission plan," said Ed Weiler, associate administrator for NASA's Science Mission Directorate at NASA Headquarters in Washington. "The twins have worked almost 20 times that long.  That's an extraordinary return of investment in these challenging budgetary times."

The rovers have made important discoveries about wet and violent environments on ancient Mars. They also have returned a quarter-million images, driven more than 21 kilometers (13 miles), climbed a mountain, descended into craters, struggled with sand traps and aging hardware, survived dust storms, and relayed more than 36 gigabytes of data via NASA's Mars Odyssey orbiter. To date, the rovers remain operational for new campaigns the team has planned for them.

"These rovers are incredibly resilient considering the extreme environment the hardware experiences every day," said John Callas, JPL project manager for Spirit and Opportunity. "We realize that a major rover component on either vehicle could fail at any time and end a mission with no advance notice, but on the other hand, we could accomplish the equivalent duration of four more prime missions on each rover in the year ahead."

Occasional cleaning of dust from the rovers' solar panels by Martian wind has provided unanticipated aid to the vehicles' longevity. However, it is unreliable aid. Spirit has not had a good cleaning for more than 18 months. Dust-coated solar panels barely provided enough power for Spirit to survive its third southern-hemisphere winter, which ended in December.

"This last winter was a squeaker for Spirit," Callas said. "We just made it through."

With Spirit's energy rising for spring and summer, the team plans to drive the rover to a pair of destinations about 183 meters (200 yards) south of the site where Spirit spent most of 2008. One is a mound that might yield support for an interpretation that a plateau Spirit has studied since 2006, called Home Plate, is a remnant of a once more-extensive sheet of explosive volcanic material. The other destination is a house-size pit called Goddard.

"Goddard doesn't look like an impact crater," said Steve Squyres of Cornell University, in Ithaca, N.Y. Squyres is principal investigator for the rover science instruments. "We suspect it might be a volcanic explosion crater, and that's something we haven't seen before."

A light-toned ring around the inside of the pit might add information about a nearby patch of bright, silica-rich soil that Squyres counts as Spirit's most important discovery so far. Spirit churned up the silica in mid-2007 with an immobile wheel that the rover has dragged like an anchor since it quit working in 2006. The silica was likely produced in an environment of hot springs or steam vents.

For Opportunity, the next major destination is Endeavour Crater. It is approximately 22 kilometers (14 miles) in diameter, more than 20 times larger than another impact crater, Victoria, where Opportunity spent most of the past two years. Although Endeavour is about 12 kilometers (7 miles) from Victoria, it is considerably farther as the rover drives on a route evading major obstacles.

Since climbing out of Victoria four months ago, Opportunity has driven more than a mile of its route toward Endeavour and stopped to inspect the first of several loose rocks the team plans to examine along the way. High-resolution images from NASA's Mars Reconnaissance Orbiter, which reached Mars in 2006, are helping the team plot routes around potential sand traps that were not previously discernable from orbit.

"We keep setting the bar higher for what these rovers can do," said Frank Hartman, a JPL rover driver.  "Once it seemed like a crazy idea to go to Endeavour, but now we're doing it."

Squyres said, "The journeys have been motivated by science, but have led to something else important. This has turned into humanity's first overland expedition on another planet. When people look back on this period of Mars exploration decades from now, Spirit and Opportunity may be considered most significant not for the science they accomplished, but for the first time we truly went exploring across the surface of Mars."

JPL, a division of the California Institute of Technology, Pasadena, manages the Mars Exploration Rovers for the NASA Science Mission Directorate, Washington. For more information about Spirit and Opportunity, visit: http://www.nasa.gov/rovers .