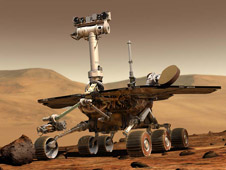 Rover engineers at NASA's Jet Propulsion Laboratory, Pasadena, Calif., are diagnosing why the motor, one of five in the robotic arm, stalled on April 14 after much less motion that day than in the case of several earlier stalls. They are also examining whether the motor can be used and assessing the impact on Opportunity's work if the motor were no longer usable.

The motor controls sideways motion at the shoulder joint of the rover robotic arm. Other motors provide up-and-down motion at the shoulder and maneuverability at the elbow and wrist. A turret at the end of the arm has four tools that the arm places in contact with rocks and soils to study their composition and texture.

"Even under the worst-case scenario for this motor, Opportunity still has the capability to do some contact science with the arm," said JPL's John Callas, project manager for the twin rovers Opportunity and Spirit. "The vehicle has quite a bit of versatility to continue the high-priority investigations in Victoria Crater and back out on the Meridiani plains after exiting the crater."

The performance of the motor in the past week is consistent with increased resistance in the electrical circuit, such as from degrading of wire in the winding, rather than a mechanical jam. Additional tests are planned for checking whether the apparent resistance is localized or intermittent.

Opportunity and Spirit landed on Mars in January 2004 to begin missions originally planned for three months. They have continued operating for more than four years, though each with some signs of aging.

Opportunity's balky shoulder motor began stalling occasionally in November 2005. The motor could still be operated by applying increased voltage. Engineers assessed it has an increased likelihood of becoming unusable, however, so the team changed its standard procedures for stowing and unstowing the arm.

Until then, on days when the arm would not be used, the team kept it stowed, resting on a hook under the front of the rover deck. Motion of the stall-prone shoulder motor is necessary to unstow the arm, so if the motor were to become unusable with the arm in the stowed position, the arm could not be deployed again. With diminished confidence in the balky motor, the team began unstowing the arm at the end of each day's drive rather than leaving it stowed overnight. This keeps the arm available for use even if the motor then stops working.

This spring, Opportunity is crossing an inner slope of Victoria Crater to reach the base of a cliff portion of the crater rim, a promontory called "Cape Verde." On April 14, Opportunity was backing out of a sandy patch encountered on the path toward Cape Verde from the area where the rover descended into the crater. As usual, the commands included unstowing the arm at the end of the day's short drive. The shoulder motor barely got the arm unstowed before stalling.

"We'll hold off backing out of the sand until after we've completed the diagnostic tests on the motor," Callas said. "The rover is stable and safe in its current situation, and not under any urgency. So we will take the time to act cautiously."

JPL, a division of the California Institute of Technology in Pasadena, manages the Mars Exploration Rover project for the NASA Science Mission Directorate, Washington. Additional information about Spirit and Opportunity is available online at http://www.nasa.gov/rovers.