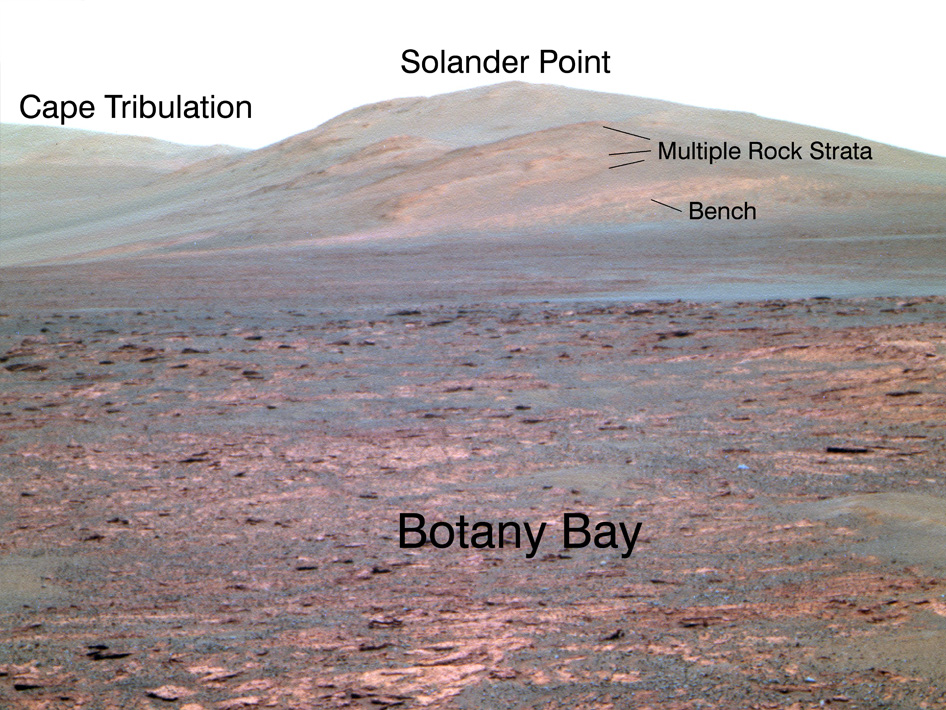 NASA's Mars Exploration Rover Opportunity used its panoramic camera (Pancam) to acquire this view of "Solander Point" during the mission's 3,325th Martian day, or sol (June 1, 2013). The southward-looking scene, presented in false color, shows Solander Point on the center horizon, "Botany Bay" in the foreground, and "Cape Tribulation" in the far background at left.

Botany Bay is a topographic saddle exposing sedimentary rocks that are part of the Burns formation, a geological unit Opportunity examined during earlier years of the mission. At Botany Bay, the Burns formation is exposed between isolated remnants of Endeavour Crater’s rim. Solander Point and Cape Tribulation are rim segments south of Botany Bay. Opportunity is on the way to Solander Point to spend the upcoming winter season on northerly tilted surfaces. Extensive rock strata are evident on the northern side of Solander Point, and these ancient rocks and surrounding bench materials will be investigated in detail by Opportunity as part of the winter science campaign.

The image combines three exposures taken through Pancam filters centered at wavelengths of 753 nanometers, 535 nanometers and 432 nanometers, displayed as red, green, and blue colors. This false-color version makes some differences among geological materials easier to distinguish. Unannotated versions of the same scene are also available in approximately true color and in false color.