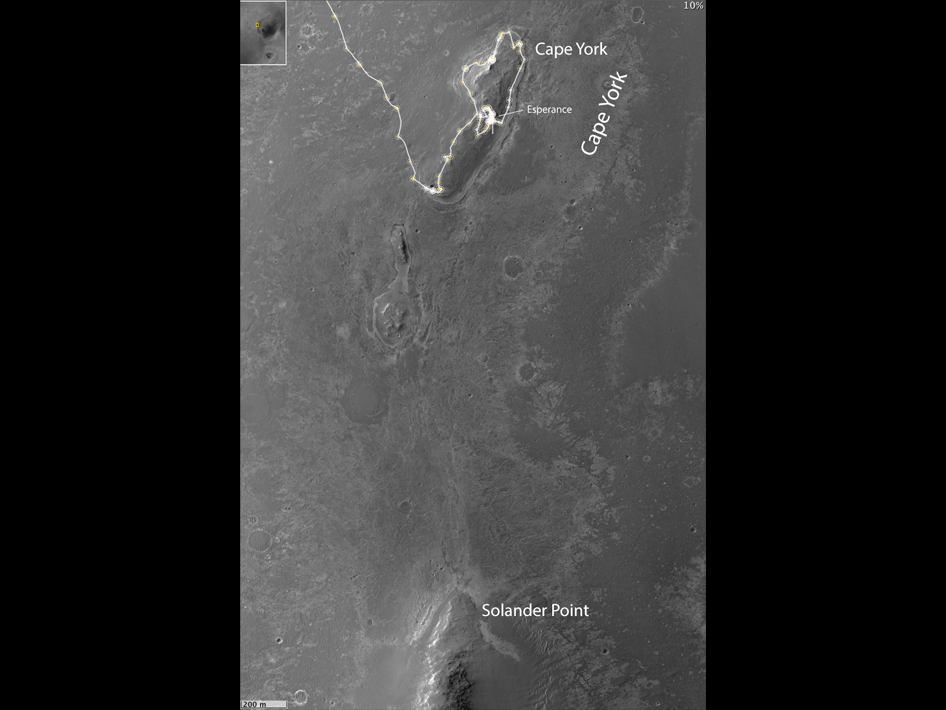 This map of a portion of the western rim of Endeavour Crater on Mars shows the area where NASA's Mars Exploration Rover Opportunity worked for 20 months, "Cape York," in relation to the area where the rover team plans for Opportunity to spend its sixth Martian winter, "Solander Point."

The scale bar at lower left is 200 meters (one-eighth of a mile). The inset at upper left indicates the location of the mapped area in relation to the entire Endeavour Crater, which is 14 miles (22 kilometers) in diameter. Both Cape York and Solander Point are raised sections of the crater's western rim.

Opportunity arrived at the edge of Endeavour Crater in August 2011 after a two-year trek from Victoria Crater, where it had spent two years. Observations by NASA's Mars Reconnaissance Orbiter detected traces of clay minerals in a portion of Cape York, and the rover team used that information to guide Opportunity's exploration of the area. Opportunity finished its inspection of targeted rocks on Cape York with examination of "Esperance," indicated on this map. Esperance was found to have a composition suggesting the presence of clay minerals formed by water intensely altering the rock.

Solander Point has a north-facing slope favorable for electrical output by Opportunity's solar panels during the coming southern-hemisphere winter. The minimum-sunshine days of the winter will be in February 2014. The rover team plans to get Opportunity to a northerly tilt well before then. The anticipated drive distance from Esperance to Solander Point is about 1.4 miles (2.2 kilometers). Opportunity began that trek on May 14, 2013.

The base image for this map is from the High Resolution Imaging Science Experiment (HiRISE) camera on NASA's Mars Reconnaissance Orbiter.