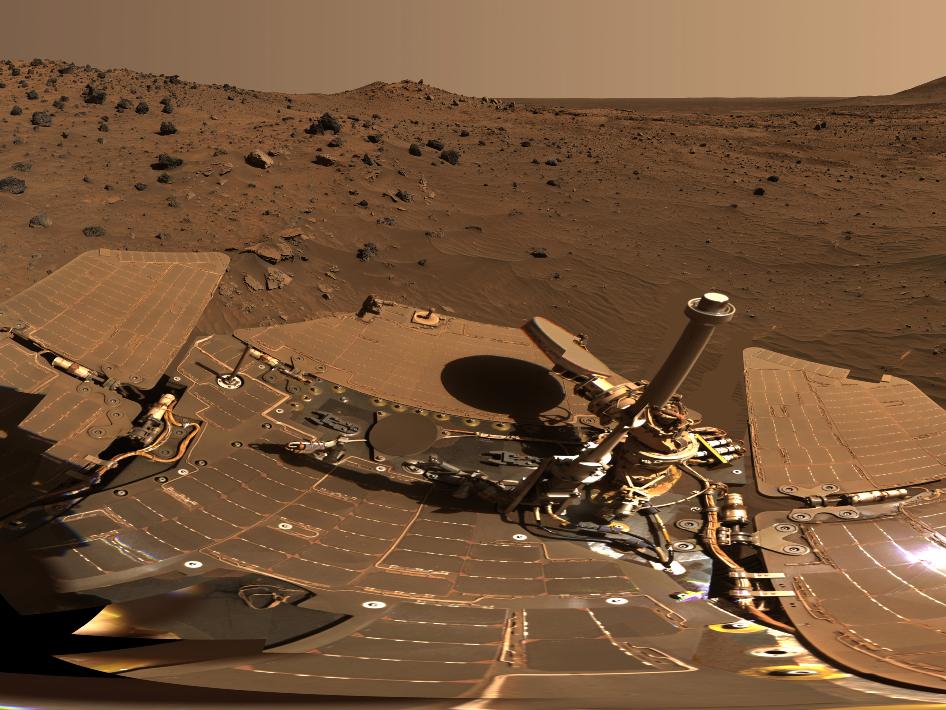 This 360-degree view, called the "McMurdo" panorama, comes from the panoramic camera (Pancam) on NASA's Mars Exploration Rover Spirit. From April through October 2006, Spirit stayed on a small hill known as "Low Ridge." There, the rover's solar panels were tilted toward the sun to maintain enough solar power for Spirit to keep making scientific observations throughout the winter on southern Mars. This view of the surroundings from Spirit's "Winter Haven" is presented in approximately true color.

This beautiful scene reveals a tremendous amount of detail in Spirit's surroundings. Many dark, porous-textured volcanic rocks can be seen around the rover, including many on Low Ridge. Two rocks to the right of center, brighter and smoother-looking in this image and more reflective in infrared observations by Spirit's miniature thermal emission spectrometer, are thought to be meteorites. On the right, "Husband Hill" on the horizon, the rippled "El Dorado" sand dune field near the base of that hill, and lighter-toned "Home Plate" below the dunes provide context for Spirit's travels from mid-2005 to early 2006.

Left of center, tracks and a trench dug by Spirit's right-front wheel, which could no longer rotate, exposed bright underlying material. This bright material is evidence of sulfur-rich salty minerals in the subsurface, providing clues about the watery past of this part of Gusev Crater.

A version of the McMurdo panorama without the rover deck, but including a supplemental figure with landscape features labeled, is at http://photojournal.jpl.nasa.gov/catalog/PIA01907 .

This is an approximately true-color, red-green-blue composite panorama generated from images taken through the Pancam's 600-nanometer, 530-nanometer and 480-nanometer filters. Some image mosaic seams and brightness variations in the sky as well as several other small areas of color mis-alignments or other mismatch problems have been smoothed over in image processing in order to simulate the view that a human would see if he or she were standing here and looking around. This "natural color" view is the rover team's best estimate of what the scene would look like if we were there and able to see it with our own eyes. It is presented as a cylindrical projection.

Spirit completed its three-month prime mission on Mars in April 2004, then continued operating in bonus extended missions into March 2010, when it ceased communicating.