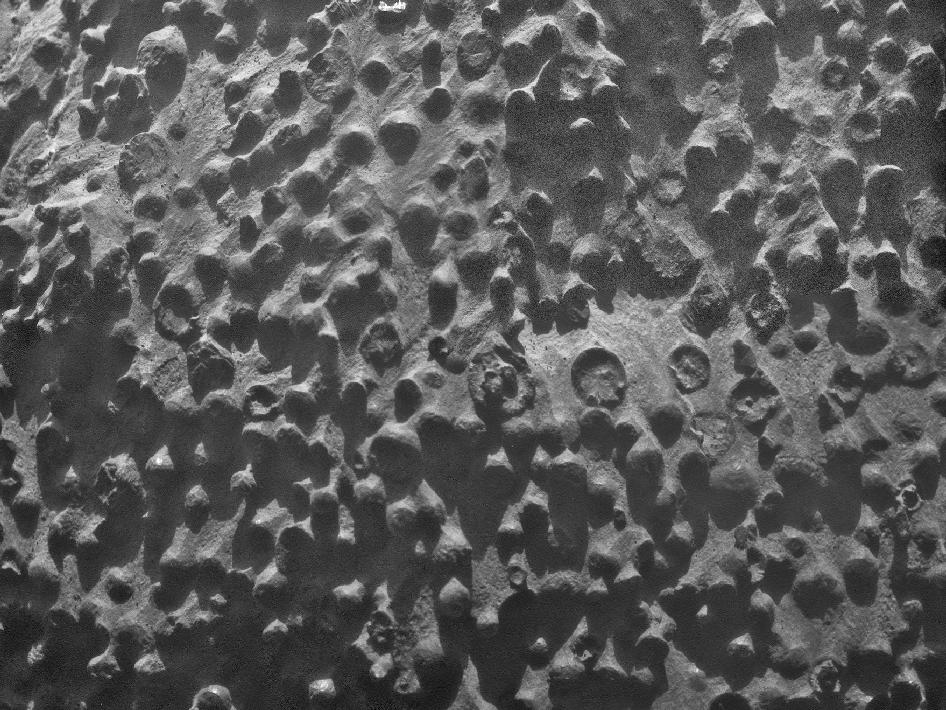 Small spherical objects fill the field in this mosaic combining four images from the Microscopic Imager on NASA's Mars Exploration Rover Opportunity. The view covers an area about 2.4 inches (6 centimeters) across, at an outcrop called "Kirkwood" in the Cape York segment of the western rim of Endeavour Crater. The individual spherules are up to about one-eighth inch (3 millimeters) in diameter.

The Microscopic Imager took the component images during the 3,064th Martian day, or sol, of Opportunity's work on Mars (Sept. 6, 2012). For a color view of the Kirkwood outcrop as Opportunity was approaching it two weeks earlier, see PIA16128 .

Opportunity discovered spherules at its landing site more than eight-and-a-half years earlier. Those spherules were nicknamed "blueberries." They provided important evidence about long-ago wet environmental conditions on Mars because researchers using Opportunity's science instruments identified them as concretions rich in the mineral hematite deposited by water saturating the bedrock. A picture of the "blueberries" from the same Microscopic Imager is PIA05564 .

The spherules at Kirkwood do not have the iron-rich composition of the blueberries. They also differ in concentration, distribution and structure. Some of the spherules in this image have been partially eroded away, revealing concentric internal structure. Opportunity's science team plans to use the rover for further investigation of these spherules to determine what evidence they can provide about ancient Martian environmental conditions.