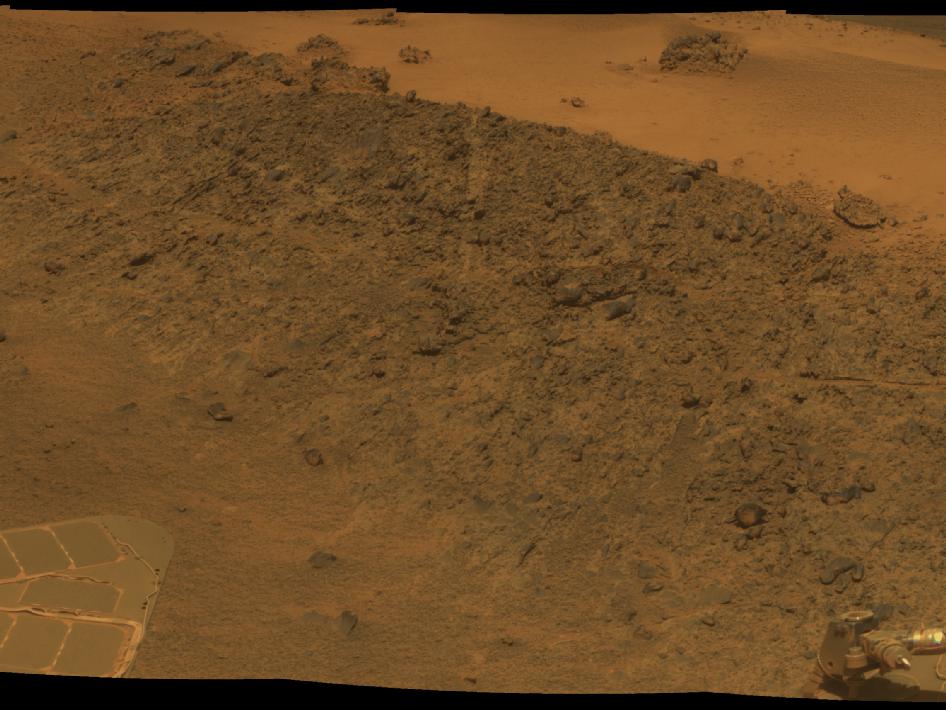 This mosaic was acquired by the Mars Exploration Rover Opportunity's Panoramic Camera (Pancam) on Sol 2793 (Dec. 2, 2011). It shows a north-facing outcrop, informally named "Greeley Haven," where Opportunity will work during the rover's fifth Martian winter. The rover team chose this designation as a tribute to the influential planetary geologist Ronald Greeley (1939-2011), who was a member of the science team for the Mars rovers and many other interplanetary missions.

The site is of interest not only for its geologic features but because it has favorable northerly slopes to optimize Opportunity's solar energy as winter approaches in the southern hemisphere of Mars. After this mosaic was acquired, Opportunity backed up the slope to park at approximately 16 degrees northerly tilt and used tools on its robotic arm (Instrument Deployment Device, or IDD) to examine rock and soil targets. After deciding that the site could serve the mission well for the next several months, the team designated it as a memorial for Greeley, who taught generations of planetary scientists at Arizona State University, Tempe, until his death on Oct. 27, 2011.

The site is near the northern tip of the "Cape York" segment of the western rim of Endeavour Crater.

The image combines exposures taken through Pancam filters centered on wavelengths of 753 nanometers (near infrared), 535 nanometers (green) and 432 nanometers (violet). The view is presented in approximate true color. This "natural color" is the rover team's best estimate of what the scene would look like if humans were there and able to see it with their own eyes.

Plans for research continuing through the months at Greeley Haven include a radio-science investigation of the interior of Mars, inspections of mineral compositions and textures on the outcrop, and assembly of a full-circle, color panorama of the surroundings. The planned full-circle image will be called the Greeley Panorama.